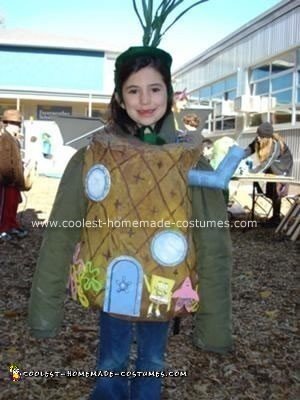 My daughter wanted a Spongebob Costume with a unique twist, so we decided to make Spongebob’s house, the Pineapple Under the Sea.

The Spongebob Pineapple costume is newspaper paper mache that was laid over a wire-frame mold. We used a wreath-form from the craft store around her neck and at the base of the pineapple and attached the wires between them, forming the wires vertically into a pineapple shape.

Then we laid the paper mache over the wires horizontally and diagonally. We used large pieces of paper mache first to make the form and then smaller ones on top to make the shape smoother.

It was painted to look like the ‘real’ one. The door, windows, chimney are glued-on, painted cardboard. Spongebob is from an actual kitchen sponge with arms and legs cut and his face and clothes painted on. My daughter made Patrick. He (and the flowers around the base of the pineapple) are made from crafting foam. Her head piece is a smaller wreath-form covered in fabric that also ties around the bottom of her chin. It’s topped with glued-on greenery to look like the top of a pineapple.

Even though her costume is inspired by a Nickelodeon show, she still won a costume contest that was sponsored by Disney!