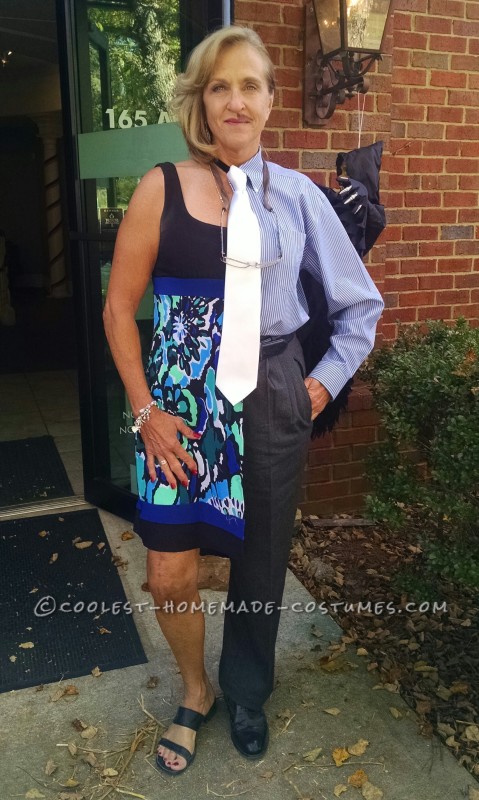 The idea for this split personality costume was totally unrelated to costumes all together.

A couple of months ago, I was having a conversation with a colleague about two-faced people. People that “talk out of both sides of their mouth” and that contradict themselves regularly. Sometimes you can’t tell if they mean to be so unstable or not, OR do they really have a split personality? Two people vying for one body and honestly not knowing the thoughts of the other.

It was an odd conversation but I’m a very visual person and it created a mental image of this character that was truly a split person.

The idea of this being a costume didn’t materialize until a couple of weeks ago when I was on my way to a meeting and had a little spare time on my hands. I was sitting in traffic, saw a Goodwill store and decided to see what I could find. I had no preconceived plans when I walked in. I strolled around, gathered an array of items from both the ladies’ and men’s departments and headed to the dressing room. While waiting in line you should have seen the looks from other shoppers. I was having fun with it.

Finding men’s clothes and shoes in my size (I’m not a very large woman) was a challenge, and the color combinations had to work together just to please my sense of reason.

I had no idea exactly how the parts would all go together, but didn’t really care. It was fun and I only spent $ 23.00, so if it worked, great. If not, oh well. An hour or so later, now late for my meeting, I was on my way.

Like I said, the colors all had to work together but not blend together too much. I really lucked out on my findings.
I took it all home, laughing about this all the way. I don’t sew!!! At best I sew a button on every five years! The arthritis in my hands makes it hard to even thread a needle, so I’m wondering what I was thinking at this point. The next day, a trip for some double sided hem tape that you iron on was absolutely first order of business.

I tried all the items on together and came up with a plan… not knowing yet how it would all go together. It felt odd cutting into perfectly good items, but oh well. I started by deciding which half would be male and which one female. Honestly, the natural part in my hair was the deciding factor.

First, I split the shirt up the back and hemmed the edge. Then I cut off one pant leg short enough to wear under the dress. So far so good. Then I split the dress up the middle front and back and hemmed both edges. . First mistake! When I put it all on, the dress gaped open a little in the front and alot in the back. I ended up having to glue back on a piece of dress I had already cut off. And because I had left some to tuck in, I had to turn the piece sideways. The pattern was totally wrong, but in the end, nobody even noticed. I sewed a small eye-hook on to the crotch area of the pants and then on the inside of the front of the dress and that fixed the gap in the front.

Then, I put everything back on and figured out how to tuck in the shirt but not the dress. This part took a few fittings. Once I had it sorted out, I hemmed the two parts together front and back.
I sewed a 1/2″ piece of velvet ribbon into the shirt collar to go around my neck and hold the collar together and then pinned the tie on from the inside.

All in all, it took about 12 hours of cutting and pasting!

An important element of this costume was that I needed to be able to wear it to work and last all day. My company plays up Halloween pretty well, and I always come in costume. I couldn’t let them down, but, I had to meet with a client and be able to sit at my desk (on an exercise ball, no less) and work on my computer throughout the day.

The morning of, I slicked back my hair on the man-side, wore no make up and painted on a small mustache. On the woman-side, I beefed up my make-up and painted my nails bright red (something I never do!) and even tweezed my eyebrow a little thinner than normal.

The reactions were great!!  I had to meet a client and I’m sure they didn’t know what to think. I hope they come back!

By 10 am, my employees were comig to my office from all different departments just to see the costume that they had heard about. Some people thought it was funny while others seemed truly puzzled.
Everyone loved it. My best friend just looked at me weird all day!

The juxtaposition of the two sexes together seemed to trouble people at first… like they weren’t sure what they were seeing.

I went to dinner, and got some very odd looks from strangers even though it was Halloween and there were costumes everywhere. Some gave me a thumbs-up, some laughed, some didn’t say much, but most wanted a picture! 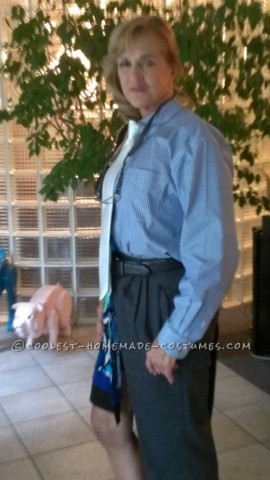 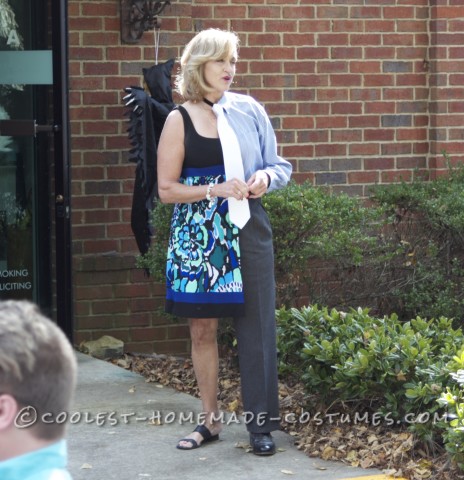