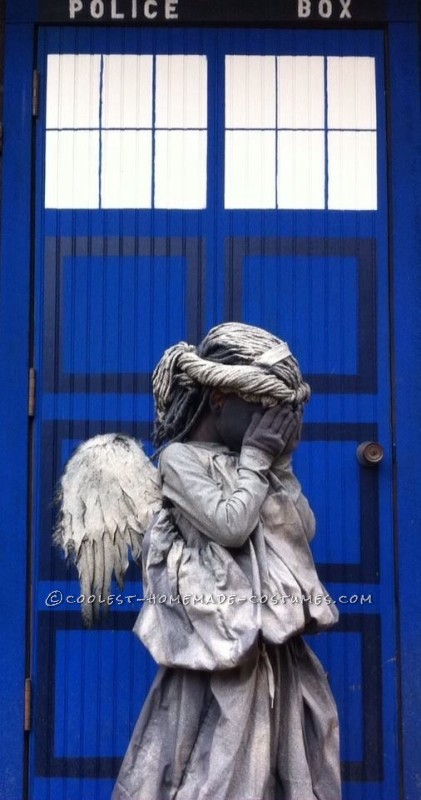 It all started when my 7 year old daughter told me that she wanted to be a weeping angel from the TV series Doctor Who. After searching everywhere for a costume and having no luck, I decided that I was just going to have to make the costume for her.

I found a pattern online for a peplos, which is the closest design I could find  to make the dress look like the actual outfits on the show. After a long day of sewing and fighting with my sewing machine, the dress was complete. I couldn’t have her wear the dress alone because it is quite cold where we live, so I opted for a long sleeve shirt for her to wear under the dress.

With that portion complete, I was onto the wig. I looked around quite a bit trying to get ideas and figure out what I was going to do to make it work. I had decided that I wanted to use yarn to make the wig, but I was still trying to figure out how. I happened to come across a wig cap that was assembled somewhat like a fishnet, and the wheels started turning. I returned home with my yarn and wig cap, and immediately began cutting my yarn into 30″ strips. once I finished cutting all the pieces, I talked my husband into being my ‘head model’. I put the wig cap on his head and started weaving the yarn half way through each hole and tying in them place (this took the longest out of everything). With the yarn all tied in place, I took the wig off of my husbands head and out it onto a balloon (my husbands idea). Now I was able to style the wig to my liking and I stitched a small piece of fabric across some of  the ‘hair’ to make it look like a headband.

Onto the wings! I salvaged some cardboard from old boxes and cut them into the shape of wings. I bought some feathers and elastic from a local craft store, the feathers were hot glued to the cardboard as were the elastic strips.

With all of the pieces made, I headed outside with them, along with the few cans of concrete textured spray paint I had purchased. I coated everything in the spray paint. There was some difficulty in figuring out how to get the dress to lay right before spraying it because it would need to lay that same way when she was wearing it. I ended up safety pinning a pillow to the hanger, placing the dress over the pillow, and tying a string around the mid section of the dress so that I could pull some of material up and over the string to get the ‘poof’ I desired in the front.

The finishing touch to the costume was the body paint… I could not find a gray paint so I mixed black and white together. i put the body paint on her first and then added the rest of the costume, piece by piece. After a few touch ups to the body paint and a pair of gray gloves, she was complete! The Littlest Weeping Angel was standing in front of me! We are all Doctor Who fans and happen to have a door that is painted like the Doctor’s Tardis, which made the perfect backdrop for her pictures.

I hope you enjoy her costume and if you choose to make one, I wish you luck and patience! Happy Halloween