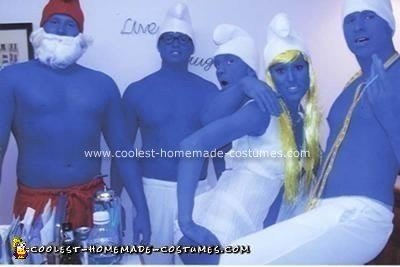 As with any kid who grew up in the 80’s I was a fan of the Smurfs and what better way to pay tribute to the classic cartoon than to be dressed in the Smurfs costume. As you can see we have Papa Smurf, Smurfette, Brainy smurf and Taylor smurf.

All of the pants for the guys were white pajama pants and papa Smurf’s were dyed red. The hats were sewn together because as we found nobody sells a smurf hat. Our feet that can not be seen by the picture were covered in fabric that were sewn in the shape of our shoes and held on by elastic to give that authentic smurf look.

Smurfettes costume was somewhat the same but we used a Marilyn Monroe dress to get the right look. The paint we found to work best was the Ben Nye liquid paint. Words of advice make sure to apply lots of the presealer before applying the paint because it helps the paint adhere much better. Total cost per smurf about $30