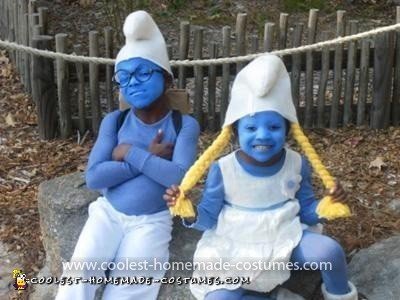 I really enjoy making my children’s costumes. After seeing my kids watch The Smurfs a million times, I knew exactly what they would be for Halloween.

Smurfette: I used an old summer white dress, cut out a flower from felt and placed a blue circle in the middle. (taken from a leftover piece of Brainy’s tail.) I also used an old hair ribbon and hot glued it around her waist to jazz it up a bit. For her hair, I used yellow yarn and braided it then sewed the ponytails to the inside of her hat. I dyed some old white tights and a long sleeve white t-shirt with Blue Rit Dye. Her shoes are slippers from the GAP.

Brainy: After searching for a tight fitting shirt and having my oldest son oppose to him wearing a leotard, I finally settled for a thermo shirt which actually worked great. I dyed his shirt with Blue Rit Dye as well. I stuffed his shirt with pillow stuffing to give it the Smurf belly look. I bought the glasses from Wal-Mart. I also got some white unisex sweatpants from Wal-Mart. For his tail, I dyed an old sock blue and stuffed it with felt, then sewed it on his sweats. I covered his shoes in white socks to give it the Smurf foot look.

Face Paint: I bought the dark blue and white liquid face paint from Party City. I mixed them together to try to get it as close to the shade of blue of their shirts as possible. The paint was about $2.00 each. It served the purpose, but it was cheap and after about an hour it began to crack and peel off. I would definitely invest in quality face makeup.

Hats: I traced a pattern on felt and cut out 2 pieces and sewed them together. I put felt in the top of the hats to give it definition.

Brainy Smurf’s Halloween book bag basket: I used an old cereal box and covered it with brown butcher paper. I accordion folded white paper and hot glued it on the side of the box to make it look like a book. I cut an opening in the top so he could put his candy in it. For the book bag straps, I cut straps from a grocery bag. I used a box cutter to cut 4 slits in the box. I put the straps through the slits and tied a knot in the back to ensure that it wouldn’t slip back out.

My children LOVED being the Smurfs in their Homemade Kids Smurf Costumes!! 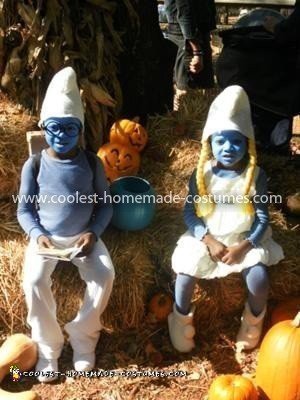 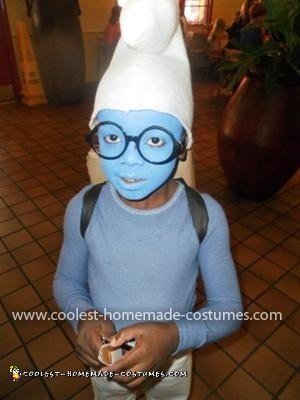 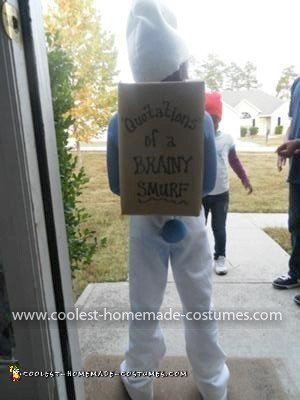