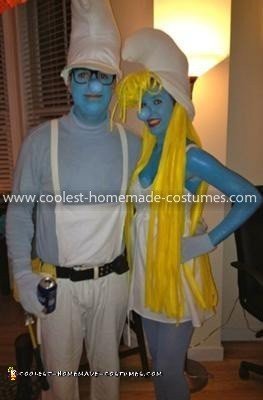 Starting these Homemade Smurfette and Handy Smurf Costumes from the top down:

The hat is easiest to make out of a stretch Terry fabric (this one is made from an old baby towel). This way, it stretches to fit your head and doesn’t look as stiff as some of the other Smurf hats I have seen. The hat was stuffed with cotton gauze that can be bought from any craft store. The front of the hair is made from a microfiber mop head, folded and sewed to an ace bandage that was used as a “head band” of sorts underneath the hat. The back of the hair was also attached and is simply yellow felt cut in attempts to look similar to the front hair. To make the hair thicker, the felt was to another sheet and than cut.

The face:
The blue cream paint and blue nose were bought as a kit ($3) from amazon.com. Pink lipstick was necessary to prevent the lovable Smurfette from looking scary.

The body:
Liquid latex body paint was bought from liquid latex.com and used on the arms, chest and back. The color was not accurate so it had to be mixed in an approximate 2:1 white to blue ratio. If you decide to give this a try, make sure to buy the finishing spray that softens up paint and makes it easier to move around. Also, it is easiest to put on with a foam brush. I went with two layers because one layer alone appeared streaky and too dark (the layer against your skin comes out darker than the actual color mixed). Gloves were white basic cotton gloves dyed blue with Rit dye.

The dress:
I owned a short white dress that was way too narrow to be a “Smurfette” dress so an old cotton slip with an elastic band was loosely sewed into the dress, trimmed of the frilly bottom, sprayed with starch for some added pouf and decorated with iron on white circular patches. Under the skirt remained the actual bottom of my dress which I pinned up so that it didn’t stick out and also added some extra body.

The bottom:
Blue microfiber tights from We Love Colors and I ended up wearing my own pair of cream patent leather heels because I didn’t want to buy a white pair.

About Handy:
Handy Smurf wears overalls instead of plain white bottoms, instead of buying white overalls (which were fairly pricey online) we made the overall top out of felt and pinned it into white scrub bottoms (that had been worn with a previous Halloween costume). Handy Smurf wore a white turtleneck and white gloves dyed blue with Rit dye- it does take a while to get the color right. The tool belt was purchased from Home Depot (because Handy needed one anyway, he is actually quite handy, but I am sure that any Halloween store has one in the accessories isle). The tool belt really pulled the costume together because it covers where the overall top was pinned into the pants and also separates the fabric so you don’t notice that they are not the same. Handy had white shoe covers made of felt (not featured) and a large pencil that fit behind his ear (made from the handle of the foam paint brush). The hat only differs from the other Smurf hats in that a painters brim is attached to the front but, to make things easier, a painters hat can simply be worn underneath. 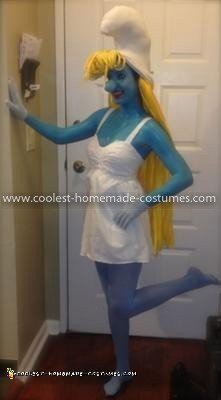 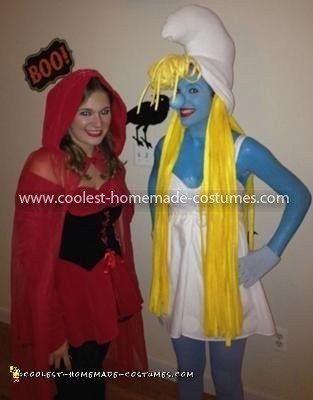