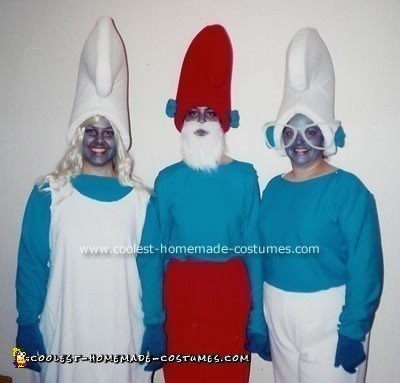 My friends and I decided to go in a Smurfs costume for Halloween. None of us sew so the glue gun is our best friend! We bought some thick foam and cut out the shape of the smurf hat, glued the two pieces together and then covered them with a white flannel sheet.

We also covered some shoes with foam pieces shaped like the smurf shoes. We couldn’t find smurf blue face paint but we found some lovely blue eyeshadow to mix together with Vaseline and make our own blue tint.

Smurfette was completed with a blond wig and we made a dress out of an old sheet, we cut it out going by a picture of Smurfette. She also had blue leggings and we found little blue stretchy gloves for our hands. We made our blue shirts out of material but since we don’t sew of course they are glued together too! They are still holding together after many years.

For Brainy Smurf we found some big gag glow in the dark glasses and the blue shirt and white pants. For Papa Smurf we made his beard out of white fun fur and his hat was red as were his pants.

The heads and the shoes were the hardest part since we didn’t have a pattern but between the three of us we figured it out by drawing on the foam before we cut it and then once it was glued together we tried on our own hats to make sure they fit and how big the opening would be. 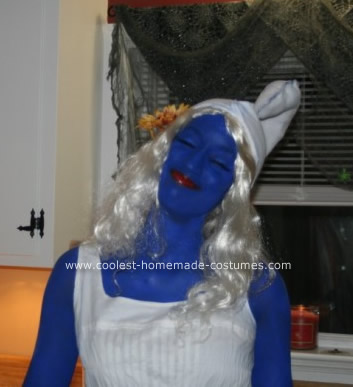