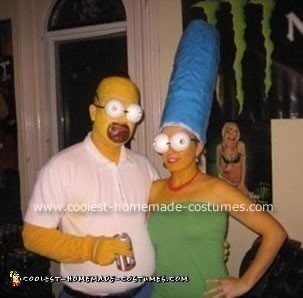 This Simpson Halloween costumes was the product of unemployment. Weeks before Halloween I began strategizing and paper mache-ing the head pieces. Marge’s head piece was a bristol board tube, and then shaped with bulges of newspaper, and then papier mached, and then painted.

Homer’s head was made from combining the skull part of a Pirate hat from another costume and then papier-mached to make the rest. Once spray painted yellow, I used pipe-cleaners to make Homer’s famous hair do.

The clothing was fairly simple. I found a blue pair of pants at Value Village (thrift store) and had a white golf shirt lying around. Then instead of painting my arms yellow I used a long sleeve yellow T and some child’s mittens. On those mittens I pinned back one of the fingers, so that it was a true four fingered Simpson hand.

For Marge’s dress, we bought a tube dress from American Apparel that just happened to be the exact colour. A red beaded necklace and a pair of modest red shoes completed her outfit.

To top it off I printed off some duff beer labels and put them on a six pack of Coors light so I was truly Homer for the night!