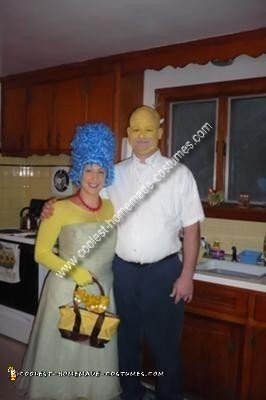 My boyfriend and I always try to come up with creative costumes for Halloween. We don’t really like bought costumes and try to come up with our own every year. We ended up choosing homemade Marge and Homer Simpsong costumes because we both loved the Simpsons when we were younger, and although we’ve moved on to family guys, we figured we would dive into our pasts to come up with this costume idea.

My boyfriend had it easy. He is already bald, so we painted his head yellow, brown for the beard, and drew Homer’s signature “hair-do” with black lipstick. He wore a white button down shirt that he stuffed with rolled up pillow cases, and wore his navy blue work pants (he’s a diesel mechanic) and behold, homer was born.

For me, Marge’s wig was from a costume store online, I bought her red jewelry from a store called dots, the dress was a green bridesmaid dress, I wore red flat shoes, I wore yellow tights on my legs and also on my arms (I cut out a hole in the crotch of the tights for my head to go in, and then I cut out places for my fingers on the part of the tights were your feet would normally go.

My boyfriend’s mother still had the Simpson’s dolls from way back when Burger King was giving them with your meal, so I put them in a yellow mini tote bag. The Simpson family was born!

I hope you enjoyed our homemade Marge and Homer Simpson costumes as much as we loved making and wearing them! 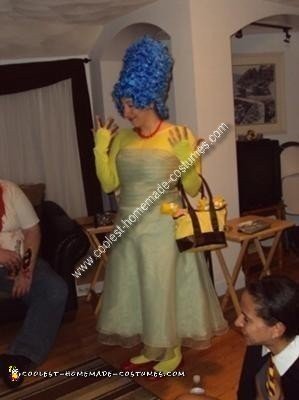 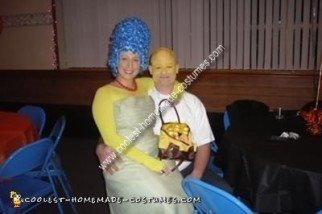