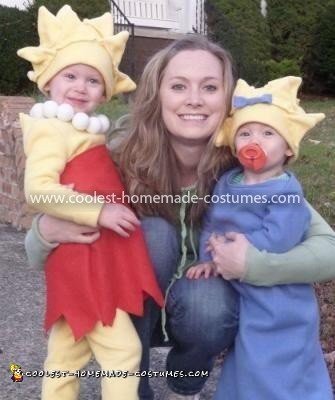 My boyfriend is a HUGE Simpsons fan. So it’s only natural that our daughters would dress in Homemade Lisa and Maggie Simpson Costumes this year. Our “Lisa” really enjoyed dressing up like “daddy’s cartoon”.

For Lisa, obviously, I wasn’t going to send my 3 year old outside with just a strapless dress on, so I had to make a shirt and pants for her. I chose a thick fleece material which I think helped with the whole cartoon look of the costume. It also hid a lot of the sewing stitches, as I’m a novice seamstress. I actually bought a pattern that included leggings, shirt, and dress. I modified the dress by cutting the sleeves off and adding the jagged bottom.

For the dress I used a thick felt material in an attempt to get the dress from laying too flat at the bottom. The necklace was made from ping-pong bulls strung together with a quilting needle and yarn. My husband sanded off the black print logo that was on each of them. It was hard to find plain red Mary Jane shoes, so she ended up wearing sparkly ones instead. I considered buying her a saxophone, but decided against it because I knew I’d just end up carrying it anyway.

For Maggie, I bought a pattern that included a baby bunting and a beanie. I used the thick fleece material again for her and made it large enough for her to fit some regular clothes under for added warmth. The pacifier was a red handled one with a circle of red craft foam slid over it.

For the “hair”. I used the beanie pattern to make their hats, which I made as big as possible to cover most of their heads and ears. I cut out like double peaked mountain pieces of yellow fabric, and then folded them back on themselves and sewed them up one side. My original idea was to stuff them with something, but as I was pinning them to the hat, I realized I’d be able to get them to stick up without doing that.

At first I sewed Maggie’s hat and just loosely stitched straight across the bottom of each triangle, but realized the closer I got to the top of the hat, the less they were sticking up. I realized if I just tacked down each bottom corner of the triangle pieces to the hat and kind of curved it a bit, then they stood up just fine. The material being thick really helped a lot with this. I just made a little bow with a strip of the same blue fabric to put in Maggie’s hair.

NOBODY else was dressed as Maggie or Lisa Simpson, so my girls were really noticeable. Cutting the patterns and cutting the material was really the most time consuming part. Pretty easy though even for me who has never done any pattern sewing of any kind!!

I should also say, to reduce some of the necessary sewing, I didn’t bother hemming the pants or the sleeves, I just folded them in on themselves and tacked them. For the waist band of Lisa’s pants,I just used a little rope and fed it through and tied them, I wasn’t going to attempt the elastic waistband thing! Oh and because the felt I used for Lisa’s dress wasn’t really stretchy I ended up using a diaper pin under each arm to pin the dress to her yellow shirt so that it wouldn’t slide down.

I spent about $50 on the material and patterns, another couple bucks for the pacifier and ping pong balls. My mother who was a HUGE help with some of the harder sewing already had the other miscellaneous stuff such as thread, needles, rope, craft foam, pins, etc.

For my 3 year old’s preschool party, she was the ONLY one with a homemade costume. It’s disappointing, because it was so fun to make. She carries this little stuffed rat around with her who she calls Ratbird and kept picking up scraps of material to make Ratbird his costume. It was fun for her to see the whole process and to pretend to make one for her stuffed animal as well.

Hope you enjoy the Homemade Lisa and Maggie Simpson Costumes as much as we did. They sure made us and a lot of others smile!! 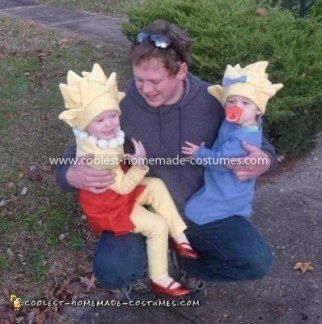 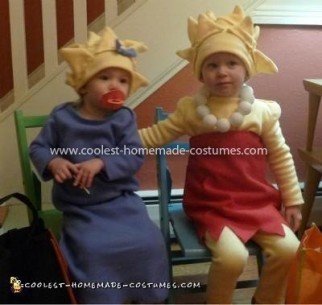 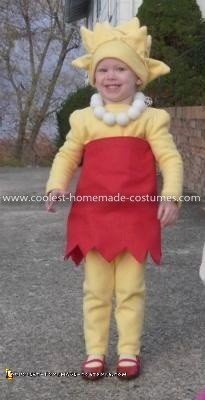