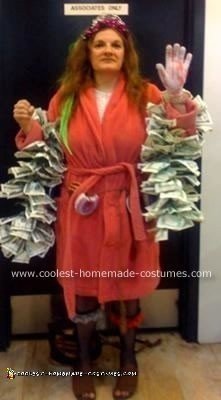 The idea I got was for a Seven Deadly Sins Halloween costume for one person. It was comprised of elements representing each of the sins: Pride, Lust, Sloth, Gluttony, Envy, Wrath, and Greed.

Whenever possible, I used items I already have around the house, including a bright-pink bathrobe, a pair or open-toed, open-heeled fancy shoes and a pair of fishnet pantyhose. The bathrobe was used to represent Sloth and the fishnets and shoes were used for Lust. I purchased two lacy garters (one red, one white) from the Spirit Store to accentuate the stockings.

The other sins were represented as follows:

Gluttony: From the Dollar Tree, I purchased several plastic dog toys that were shaped like different foods, including donuts, Oreo-like cookies, a cheese burger, a hot dog and an ice cream cone. To tie then around my waist, I cut two x-like slits in each toy (except the donuts, since they have a hole in the center) through which I drew a thick string. I taped a pen to end of the string to pass it though the slits more easily.

Envy: I used a green play hair piece and some green makeup and lipstick.

Pride: A tiara with a black skull symbol and purple and black tinsel trimming.

Wrath: This one was the least-represented sin with a white bath glove stained with fake blood

Greed: A boa made from fake $100 bills. I ordered this from an online costume store

Naturally, no one knew what this costume was supposed to be (I’d suspected that), but explaining it was fun. Most people noticed the money boa the most of all and joked about if it was real and wishing they had that much money. One or two people thought I was a money tree or something.

Fell free to try this idea, whether you do it my way or your own way. There are many ways this could be done, if you give it some thought.