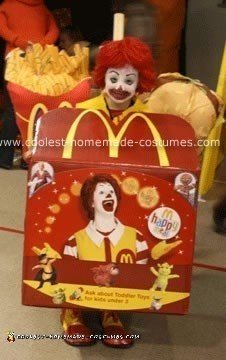 We began our search for ideas on how to create the most incredible Ronald McDonald costume out there. We started with a large cardboard box and painted it McDonald’s red. We attached ropes and pulls to the inside so that the box would hang off of my daughter over her shoulders. Then we began the long quest in search of decorations for the box.

I had a friend that owned a McDonald’s so I called them up. They donated all of the outside decorations that you see on the box. The decorations were all Happy Meal promo materials that were given to us. They were items that had been used on the menu board, the outside ordering station, and the even inside promotional posters. We cut, and cut, and cut and then hot glued them to the box. All sides of the boxes were covered to look just like a McDonald’s Happy Meal. We took yellow poster board paper and cut the large M’s to the top to make it look like a true Original Happy Meal box. We also went online and printed off McDonald’s things to attach to the box for extra decoration.

We made a large cup and straw out of poster board and affixed it into the box. We decorated it with items from the real McDonald’s and online finds. We used an old Hamburger and Fry Toddler Costume that was given to us and we sewed it up closed and stuffed it with cotton filing so that it would look full and round. We attached the filled burger, fry, and cup to yard sticks and hot glued them into the back of the box so that they would appear to be sticking out of the box.

My daughter then decided that the Happy Meal costume wasn’t enough so she came up with the Ronald McDonald idea. She wanted to BE Ronald McDonald sticking up out of the Happy Meal. Besides, we needed a toy for the Happy Meal and what better toy than Ronald McDonald himself. So, we found an old red wig and trimmed it to look like Ronald McDonald’s hair. I painted her face white and gave her the signature Ronald look with regular ole’ Halloween face paint. And we pulled out some old clown shoes and painted yellow on them to look like Ronald’s. She wore a red & white stripped shirt, yellow tights and I made a yellow vest out of material for her to wear as well. She was a true dead ringer for the famous McDonald’s clown.

She won her School Costume contest and she was the clear winner at our local McDonald’s. On Halloween we took her up to the restaurant for the final approval of the McDonald’s franchise. The Mikey D team loved it. She felt like a star as all of the McDonald’s employees rushed to have their picture taken with her. They even asked for copies of the pictures to be displayed in the restaurant.

It was not just a costume, but a great family memory we’ll cherish forever!

Coolest Hamburger in a Happy Meal