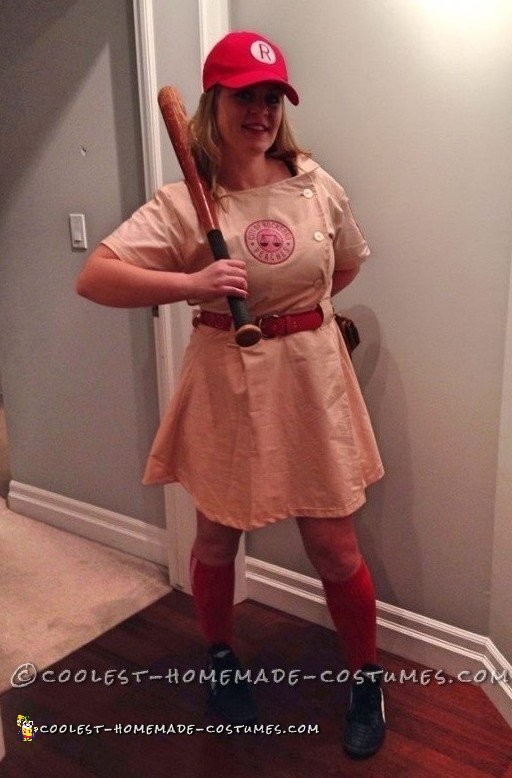 My friend shared that she was hoisting a retro sports themed party and my mind started racing. I wanted to be a derby girl from the ’70’s, a retro aerobics instructor and more. For some reason I could not get the movie A League of Their Own out of my head. I wanted to be a Rockford Peach!

So now I had the Rockford Peach costume idea, but how the heck was I going to execute it? All the costumes for sale were way too expensive so I started searching local stores for light pink dresses to start with but I had no luck.

I was on a mission though, and once I get something in my head there’s no turning back!

A few years prior my dad made my sister a Britney Spears costume for Halloween. She got a lot of compliments on it which proved his costume-making skills.

I decided that I’d ask him and he said yes. It must be stated that my dad is a visual learner and very logical. His mom, my Grana, was a seamstress and his Grandfather was a tailor, but my dad was neither of those and other than my sister’s costume he had no prior experience.

First I bought light pink/peach material from the fabric store. My dad came over and worked from a dress I already owned to get an idea of the shape and cut.

He also brought over an old button up shirt for me to try on. He pinned it to fit me then cut it apart and used the pieces as a template to trace onto the fabric. He cut our all the pieces of what would soon be my dress and then pinned it all up and took it home to start sewing it.

He came over multiple times after that for fittings and adjustments. I ended up spending more time one on one with my dad than I had in years… It was awesome!

Finally the dress was done! I bought a red belt, a Rockford Peaches hat from etsy.com and used an old pair of my soccer socks.

I purchased a copy of the logo online and printed it on iron-on transfer paper to place on the front, arm and back. Also, lately I wore a black pair of indoor soccer shoes that everyone thought were baseball cleats so I used those.

The costume was a huge hit and no one could believe my dad had made it! I couldn’t either!

Not only did I get a one-of-a-kind costume (that was the best at the party if I must say so myself), but I got a priceless experience with my dad .

It may sound silly to say we bonded over a costume, but with life being so busy with a family of my own it proved to be a really great experience! 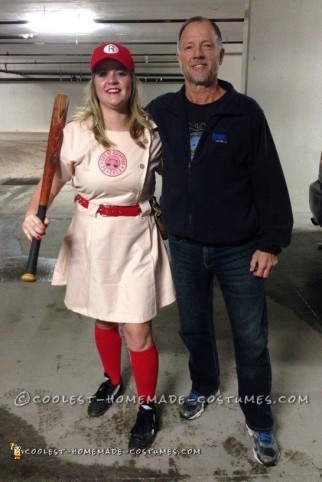 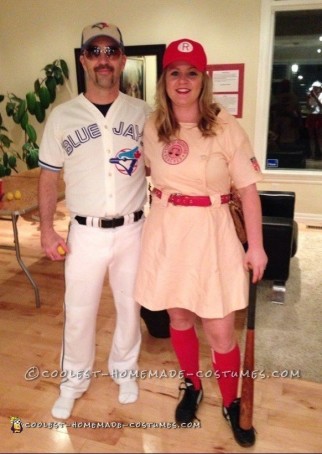 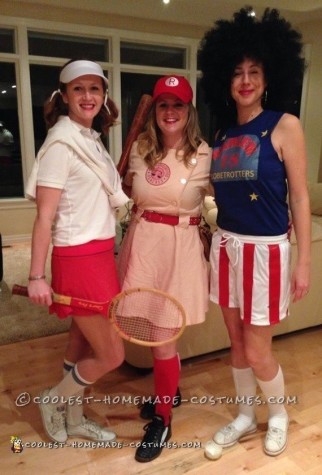 My Little Rockford Peach – League of Their Own Toddler Costume