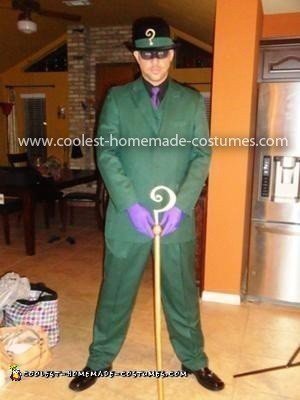 I started this Homemade Riddler Costume with a hunter green suit because I wanted to go with the understated, darker Riddler instead of the flashy one. I had the pants altered to my length and I took 2-3 inches that came off and saved them for the band around my bowler. I purchased a black bowler from a costume shop because getting a bowler to match the color of my suit would have been impossible and I wanted to go for darker anyway. I took about an inch and a half wide strip from the scraps of the pants legs and fashioned a hat band so the black bowler would mesh well with the rest of the costume. I went with a black long sleeve dress shirt to stick with the dark theme and match the black bowler. I found a purple tie at Kohl’s that was understated but had some texture to it. I found some purple satin gloves on amazon for like $5. I already had the black shoes.

For the staff I went to our local hobby lobby and picked up a wooden stick, a wooden ball and a wooden number five that had some nice curls at the end of it. I cut off the roof of the five and turned it upside down and BOOM… question mark. I then used wood clue and dowl pins to attach the upside down five to the ball to the staff. I sprayed it with a can of krylon gold and then spared a small cut out of a question mark the same color. I hot glued the question mark to the hat. The cut out was out of some foam material that we found at the local fabric store. I went through several attempts on the masks but in the end I had my fiancée use makeup to put a black mask around my eyes.. everything else I tried looked cheesy. 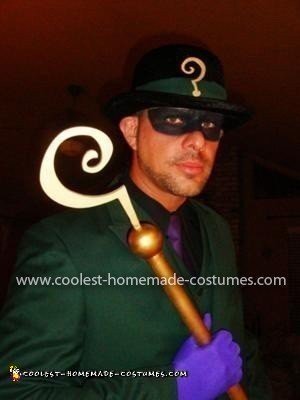 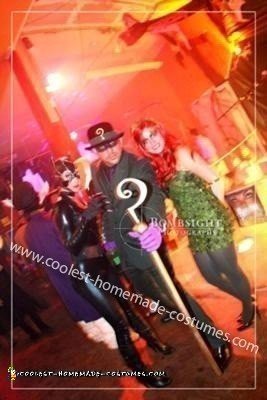 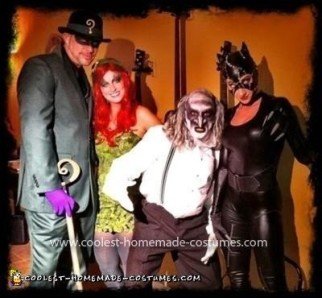