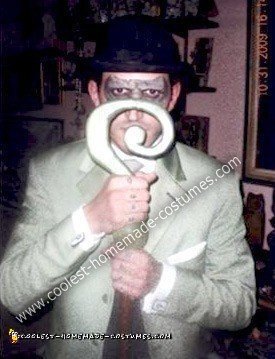 My name is Anthony. For the past four Halloween costumes I have gone the way of Batman villains. In 2006 I did the Joker, which was inspired by the 1950’s comics. Next was Two-Face, which drew inspiration from the animated series. Last year was Scarecrow, who I took ideas from the cartoons and movie. This year I chose the Homemade Batman Villain Riddler Costume.

What inspired me this year was the world of Batman that is in the media today. Before creating this costume I thought: “What Riddler would appear in a Christopher Nolan Batman movie?”

I set out to make his coat, which outside of his cane, is the only green piece in outfit. I thought him to be a dapper criminal, so when I found a white tuxedo coat I knew I had found the Riddler’s trademark. From there it was a matter of dying it the right color.

“A green bowler hat? unlikely in the real world.” His should be black and dirty, a little grime from the outside world helped envision that. But the real challenge was the cane. I wanted a cane that was different from anything seen before. So I carved it myself. This was the funnest part. Sawing and sanding and staining and sealing. I had a cane that a criminal could make, cause really, who sells Question Mark canes?

Then came the mask, the mask began as a flesh colored piece with perfect edging, but some careful work with a scissors and exacto knife as well as using makeup not designed for latex the mask turned out better than I thought. A mask that looks worn and aged.

The cufflinks were a design made by a friend and I. A friend, does exquisite work in glass (C-Glass Studios), by the name of Cheryl.

The last piece that I questioned was “How would you know this criminal mastermind is the Riddler without his green jacket, Bowler hat or cane?” Like a carved smile on a Joker’s face or a burnt half to the face of Two-face, came the tattoos. Question marks tattooed on his hands with one on his neck, then the letters GUESS WHO? across the fingers. Even in an interrogation room, you would know this man is the Riddler.

The clothing underneath, meaning the shirt, vest tie, slacks, shoes and pocket watch were all things existing in my wardrobe and were things I thought finished off his dapper persona.

As anyone entering this contest I hope my vision stands out, but beyond that, I hope my Riddler makes its mark in character interpretation. On a side note: I won’t include, but I will mention, the many Riddles I left for friends on Halloween to decipher my location in New York.

Thanks you for the opportunity.