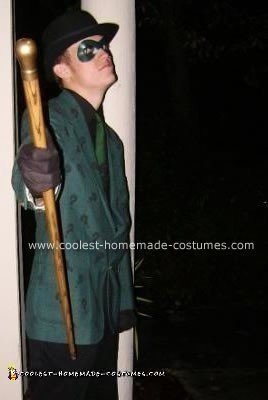 This is the first year since childhood I’ve really dressed up for Halloween, but I had a party to go to and figured I’d flex my creative muscles a bit rather than buying something cheap looking for $40 at the store. Back in September, while perusing some stores, a friend spotted a Riddler key chain and remarked that I should do The Riddler for Halloween. I enjoy Batman comics, and the more I thought about it, the more The Riddler matched not only my body type, but my personality as well, so I figured I’d give it a shot and make a Homemade Riddler Halloween Costume.

The bowler was something I already had, though I modified the color scheme a little to let me use a black bowler. I attempted to get a green bowler for authenticity, but it would have been difficult to match anything to it, and all of them look either insanely cheap or cost $30-$40. I didn’t really want to walk around in a plastic St. Patrick’s Day bowler and I didn’t want to spend an arm and a leg, so I used this New York Hat Co. bowler I picked up for approximately $30 a few years ago. The black pants and shoes were also something I already had around the house, both of which I wore to my high school graduation.

The jacket and black dress shirt came from Goodwill, totaling about $17 together. The tie was $1 at the Salvation Army. I took some cardboard from a box of canned Coca-Cola, drew and cut a small question mark design for the jacket, and a larger one for the tie, and bought a $3 can of spray paint at Walmart. I didn’t really want to do the question-marks myself, because I was afraid I’d over-think their placement, so I let my dad have at it and it came out pretty well. The tie is clipped to the bottom of my shirt with a safety pin so the question mark on it doesn’t get moved and become obscured by the jacket.

The gloves were $1 at Walmart, I think they were intended to be light-weight work gloves, but they were perfect for the costume as the material was more form-fitting to the hands and fingers than most gloves, making them less bulky as well as giving me more dexterity with them on. The cane belongs to a friend of my mom’s who was nice enough to let us borrow it for the month.

The finishing touch was the domino mask. Apparently no stores sell comic-book style domino masks as worn by Robin and Riddler from Batman, or Comedian from Watchmen, and the masquerade style domino masks aren’t really close to the shape I wanted, so I took a green vinyl pouch I found in the house, drew one side of the mask, cut it, then doubled it over to make sure it was symmetrical. Since most comics don’t leave any space between the eye and the mask, and I needed room to blind, I used some cheap black eyeliner ($3 at Walmart) around my eyes to cover up any skin you could see, then applied spirit-gum ($3 at Party City) to the mask for application.

The pants, shoes, and vinyl could probably be picked up from thrift and hobby shops for less than $10, but if you’re looking for a bargain on this costume, you’d probably have to settle for a cheaper bowler, as mine is a legitimate dress bowler. Party City sells some yellow ones for about $8 that you could take black or green spray paint to.