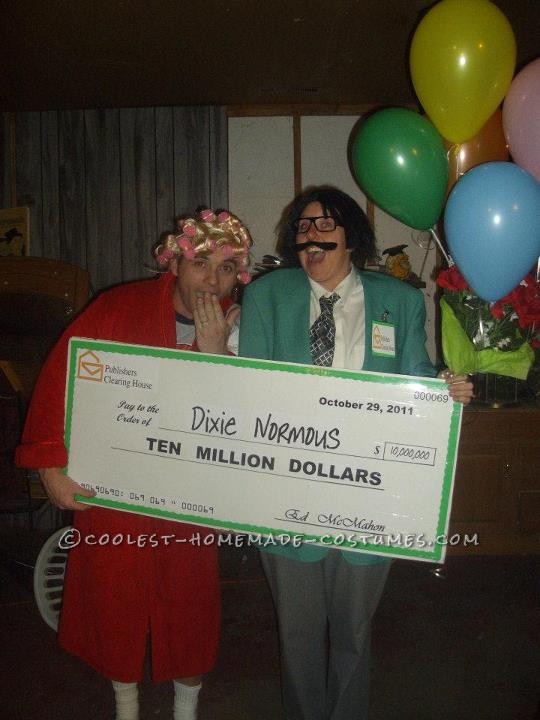 The best part of this Publisher’s Clearinghouse Prize Patrol couple costume was making the GIANT check! It was also the most time consuming part. We toyed with names for the check for a couple weeks and then finally found Dixie Normous! In the opening scene of Austin Powers, Gweneth Paltrow pulled her helmet off and there was theeee PERFECT name! And it was appropriate for the adult party we attended!

It was a very simple costume to make; just lots of hours of thinking of the perfect couple themed idea! Once it came to me, it just rolled! I knew that I had to make my husband be the woman receiving the prize so I had a lot of fun making myself into a man! After the fact, we realized we should have put a remote and a stuffed cat in his robe too! I hit on several men that night and received several hateful responses! Obviously, I had them fooled! I covered an old badge from work to make my Publisher’s Clearinghouse Prize Patrol badge.

I printed everything off the computer to use for the check! And of course, no PPH surprise would be complete without balloons and roses! (of course I used fake roses).  I sent my husband in first so everyone would get a kick out of him dressed as a woman, and then I came in with all my hoopla asking if there was a Dixie Normous in there. He jumped up screeching with excitement yelling “THAT’S ME!” We were definitely the most original and creative! Oh, and we won the top prize of the night! I have some big shoes to fill this year!