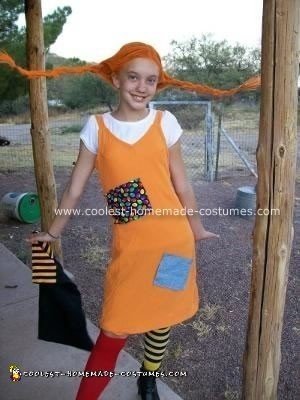 I told my daughter that it would be cool for her to be Pippi Longstocking for Halloween last year. She had no idea who that was. So I found a book and this web page, and she looked through both. She didn’t decide on a Pippi Longstocking Halloween costume untill this year, 2008.

I bought the Orange coloring for her hair. I then bought the orange dress at a second hand store. We then sewed the two square patches on the front of the dress. I told her to put on a white shirt underneath the dress. The dress was to long so I shortened it. And she got two different pairs of socks. The shoes, we were lucky and she had them in her closet, that she had not worn in a long time.

The older people told her they loved her costume, because it was something she had to think of and not just try to be something dead or bloody. Or even scary. They LOVED it. I think she looks just like a Pippi Longstocking.