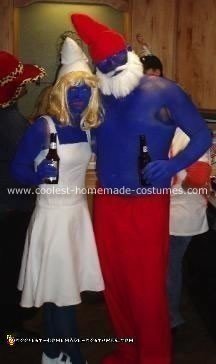 My husband and I love to dress up and strive to be the best costume in town every year. My grandmother taught me how to sew when I was four or five years old and since then have always made my own Halloween costumes.

This year’s Papa Smurf and Smurfette costume was by far my favorite. When I originally planned the costume I had a blue shirt for Jesse to wear but he said that if we were going to do it we had to do it all the way. So he had his entire upper body airbrushed blue. I think the funnest part of the night besides winning 1st place twice at two different parties was leaving our mark everywhere we went through the night. There was blue finger prints on everything.

I actually got the idea from the internet and had to alter several patterns to get the right look.