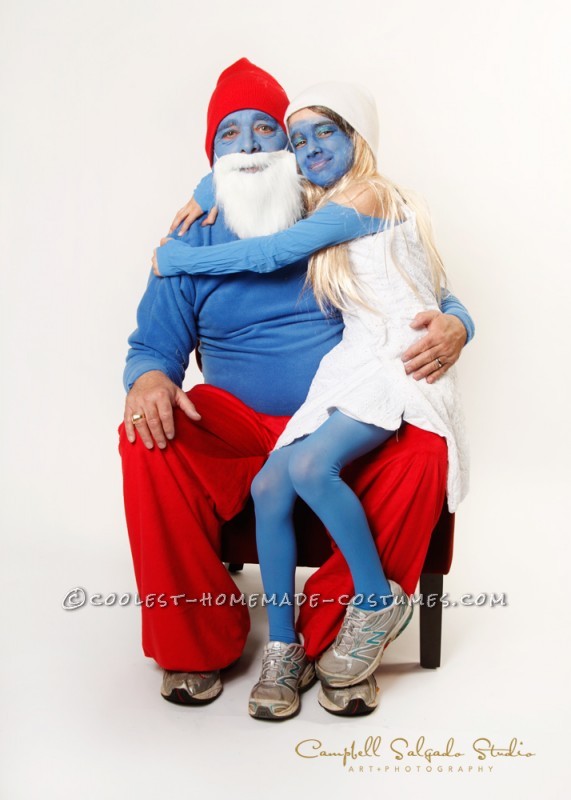 They loved the movie – so I was stuck sewing.  I didn’t want to spend a lot, so I opted for white eyelit fabric I owned, some fleece from a blanket making project and there you have it, a dad and daughter costume!

I sewed his pants and sewed the shirt.  We always have face paint around for some reason – probably sales at Target after Halloween.  Bought the beard and made the hat. I traced some track pants, added several inches along the legs for the pants and sewed in a channel for the elastic waist and around the feet.

Traced a sweatshirt and made his blue shirt. Sleeves were a bit snug at first – his wrist was going numb, so I had to make new sleeves.  Later, both pieces became part of a blanket that we donated to a local shelter. It was so cozy!

Daddy was a good sport and went out in the neighborhood with us.

I actually SEWED this dress. I added a liner and everything. Don’t know how I figured it out, but I did, I traced a dress that fit her onto the fabrics, added an inch to the width and neck area. Sewed the white silky liner fabric to the dress facing each other and then turned it inside out. The bottom needed to be finished. I cut it neatly like a scallop and just used a binding stitch around the edge.

I left room for a zipper – haven’t done that since 7th grade home economics, but I remembered – made it REALLY long so it could be a very fitted dress. I made her a purse from the left over white fabric for her candy bag.

Bought the blue tights for her arms and legs online.  Sleeves were made by cutting hole in crotch and slipping it over he head. It fit snuggly like skin and kept her warm.  Sneakers were the best footwear, as she ran a lot.

Took me a few hours to sew baggie pants – add elastic and make the top. 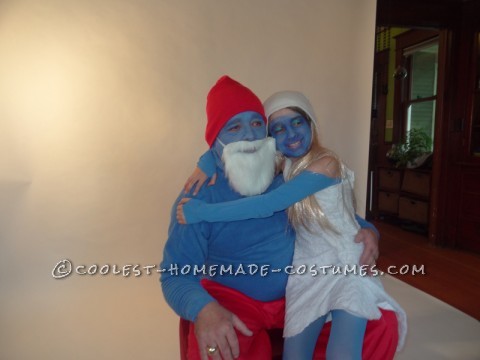 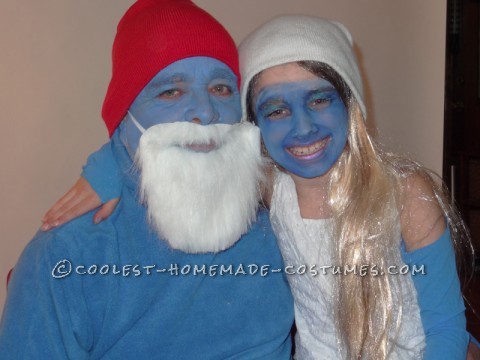