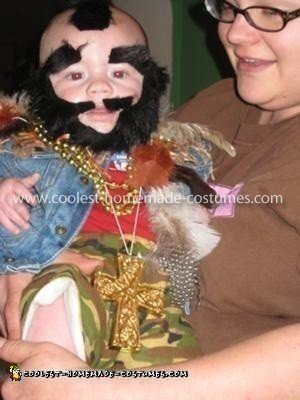 For my son’s first Halloween, I wanted to come up with a really original and creative idea. Because his name is Theodore, everyone called him Mr. T. So, I thought I would make him a Homemade Mr. T Baby Costume for Halloween!

I bought some cheap camouflage material and made some simple pants with an elastic waistband. I found a jean jacket at a consignment sale for $3, and I cut off the sleeves and frayed the armholes. I found some African print material, and I cut it out to match the top yoke of the jacket. I sewed it to the jean jacket on the top, in front and back. I now had a pair of baby camouflage pants, and a sleeveless, decorated jean jacket.

Next, I used paper to trace a rough outline of Ted’s head. Using this as a guide, I copied the pattern of Mr. T’s distinctive beard, sideburns and Mohawk. I pinned the paper to some black fake fur I had bought, and cut out the Mohawk, sideburns and beard. In the trial run of the costume, the fake fur was too long, so I trimmed it down to about ½ its original length for Halloween.

I made feather earrings by using string elastic and feathers that I bought at the fabric/craft store. I tied the elastic around each feather, securing with a knot. I arranged the feathers to hang how I wanted them, then knotted the ends of the elastic together, so that I had a circular loop of elastic, with the feathers at the bottom.

I put the baby into a red onesie, and put the pants and jean jacket on him. I then put on the jewelry—some gold mardi gras beads, and other cheap trinkets to look like Mr. T’s gold necklaces. I looped the circles of elastic over his ears, and there were his feather earrings. I also used string elastic, tied to decorative gold colored buttons, tied in a knot to secure the button, and tied together to make a small loop, for rings. He had a few “gold rings.” I then put the hair and beard on. A friend told me that KY Jelly, believe it or not, is what photographers use for babies, for bows, etc., because it is non-toxic and water soluble. So, I used KY as the adhesive, spreading it on the back of the fake fur pretty well, then attaching it to the baby’s head. He was a good sport for all of it!

We got so many comments and compliments that night. 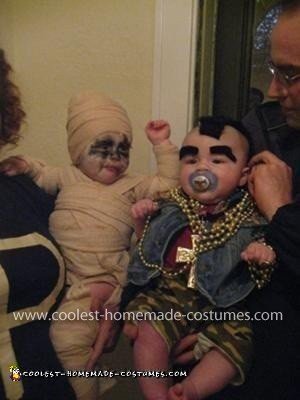