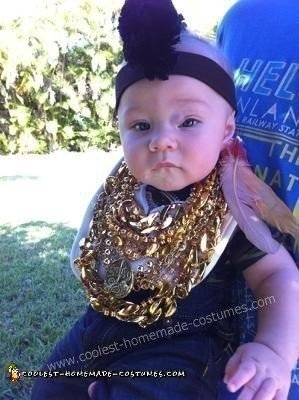 I pity da fool who wastes money on store-bought costumes like a sucka!

The A-Team was my and my husband’s favorite TV show as kids. I worshiped B.A. “Bad Attitude” Baracus in a manner most of my friends reserved for Debbie Gibson and NKOTB. So when our first child’s first Halloween came around, we were seeing gold. Chains that is. And a mohawk, camo shirt and feather earring.

We searched the internet for ideas to no avail. Dressing your infant son as a mercenary: Surprisingly less popular than one would imagine. We were on our own.

The homemade Mr T baby Halloween costume idea actually came together pretty simply, and quite cheaply. We live in Florida, so, naturally, our baby already had a camouflage onesie and a pair of jeans. To make sure he didn’t choke himself on plastic beads, we hot glued gold chains and necklaces (we had a lot of them from a long-ago trip to New Orleans, we bought the rest for less than $3 at a local party store) to a plain white bib, making it easy to get them on and off depending on his fussiness level.

For the mohawk we found giant pipe cleaners at the craft store. We layered a few sections together to give his mohawk height and width, and then just hot-glued them to a plain brown, stretchy head band from the women’s hair accessories section of the grocery story.

We contemplated piercing his ear but, ultimately, went the more conservative route simply tying on a trio of feathers (also from the craft store) to the side of the headband with a bit of kitchen twine.

Voila! In about an hour our baby was ready to bust up suckas and cause some pain! Our Little T was so awesome, he even inspired a fan! (see pictures).

To up the cool factor, we tricked out his stroller to make it look like the A-Team van. This was a last-minute decision, so the result was — eh.

We just took two squares of cardboard (from an old diaper box), painted them black and drew red racing stripes on both sides. We attached them to the stroller with leftover pipe cleaners and more hot glue. My husband also downloaded the A-Team theme song to his phone so, as we cruised the neighborhood, all the suckas knew to get out the way!

Sidenote: Our little T actually tolerated his costume really well. To him it was just a chunky bib and headband. He kept it on most of the evening. 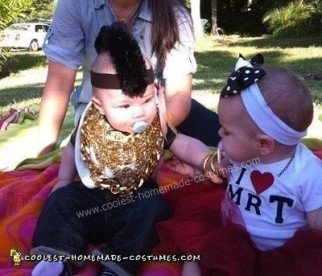 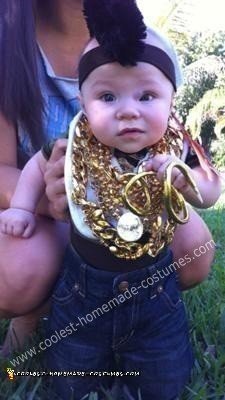 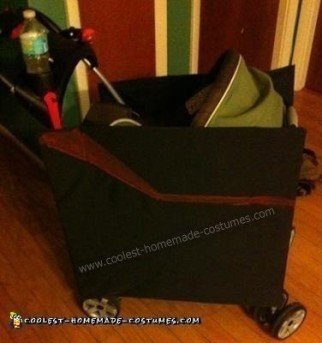