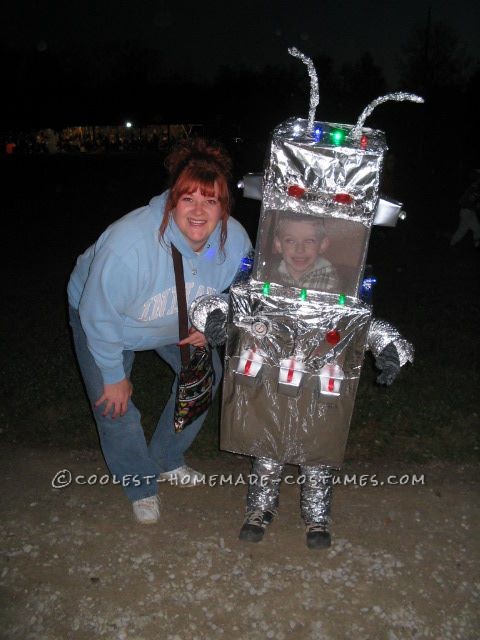 My son who is 8 has started a tradition for me for Trick-Or-Treating. He loves homemade costumes. He has been a bath tub of bubbles, zombie who died via DVD impalement and much more. He is a cub scout and wanted to enter the costume contest at the annual Spook-O-Ree last year. First place was a week FREE of resident camp where he would stay at the castle at Cub World in Loveland, Ohio. I asked him what he wanted to be and he said a robot! The ideas started to flow and with some creativity Mr. Roboto was born!

He was fairly excited with it until the compliments started coming in. Then he figured out he had a really great costume. He entered the contest when he got there around 6:00 PM. Once night fell we lit him up and you could see him from miles away. Every kid commented on how cool his costume was and began to flock around him stopping, parents, kids, other cub scouts ans even dogs!. He gained so much confidence he started to do the robot dance and finally whispered to us “I think I am going to win this Dad”. A few of the the volunteers kept telling him you better stick around for the contest winners.

So at 9:00 PM they started calling up the 3rd place winner, 2nd place winner and my son was giddy. They finally announced the 1st place winner and called his name. He was so excited and grabbed his certificate for a free week of resident camp! He earned patches and special awards in swimming, hiking, archery, BB gun shooting, crafts and much much more.

Total time spent making this: a few hours. I bought all my items at the 99 cent center. 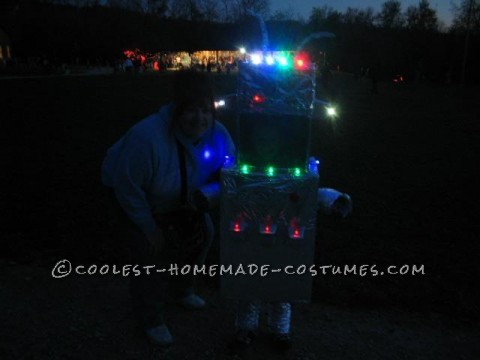 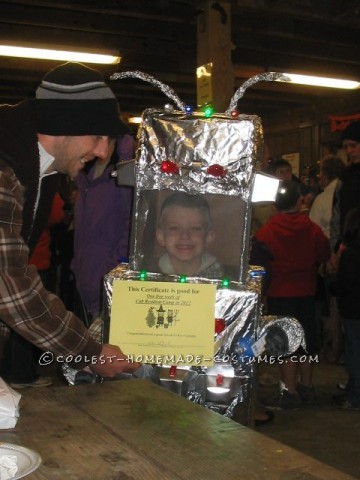