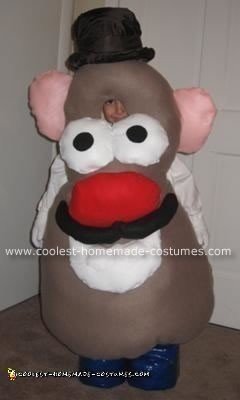 Last year my 5 year old son was all about Mr. Potato Head and that is all he would play with so it was only fitting to let him be a “taterhead” for Halloween.

So for the Mr. Potato Head costume I found two small brown fleece blankets. I cut them out about twice the size of him in the shape of a potato and then I “sewed” them together with that iron-on hem stuff. (it’s almost as good as hot glue for costumes!) I also cut out a sheet the same size and glued one piece to each piece of the fleece before putting them together to create an area for the stuffing.

I put elastic at the bottom to hold in the stuffing and give it that rounded look. The arm holes and the hole for the face were cut out and them hemmed down. All of the body pieces were made from felt and stuffed so that they looked 3-D and then I pinned them on so that you could move them around if you wanted to. There was even a pocket on the back for the extra pieces.

I made some black glasses from felt-covered posterboard. The hat was made from an old man’s hat I got at the thrift store and I filled it with stuffing to give it a rounded look. I then covered the entire hat with some black shiny fabric using that good old standby – hot glue. I pinned it to the top of the costume but it was pretty heavy and kept wanting to topple so I had to use lots of pins to keep it in place.

I had my son to wear a white long sleeved shirt and white gloves. Oh, I almost forgot about the shoes. The shoes were made from two big pieces of soft foam that I cut out in the shape of a shoe and then I covered them with blue duct tape (another costume must-have). I cut out a hole in the top and dug out enough foam to create a place for my son’s foot to slide in. They made him about 4-5 inches taller and were quite fun to walk in!

The costume probably weighed 5-6 lbs after it was all done, so he had a really hard time wearing it being that he only weighed about 35 lbs himself! He kept falling over and couldn’t get up (I think half of the time it was on purpose!). He loved it, I had a great time making it and we had tons of compliments on it. He even won a Mr. Potato Head toy in the costume contest he was in! (As if he didn’t already have enough of them at home.) 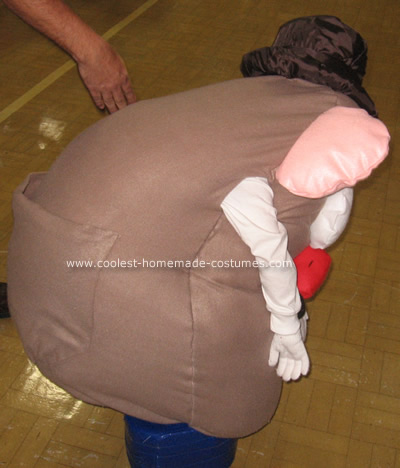