I got the idea to do Monsters Inc when my 2 year old daughter was screaming and I found myself wondering if the lights were going to start flickering.  I realized she sounded just like “Boo” and was the perfect age to use that as a costume for Halloween.  Then I decided to have my son who’s 7 be “Mike”, my husband “Sulley”, and I would be “Celia”. 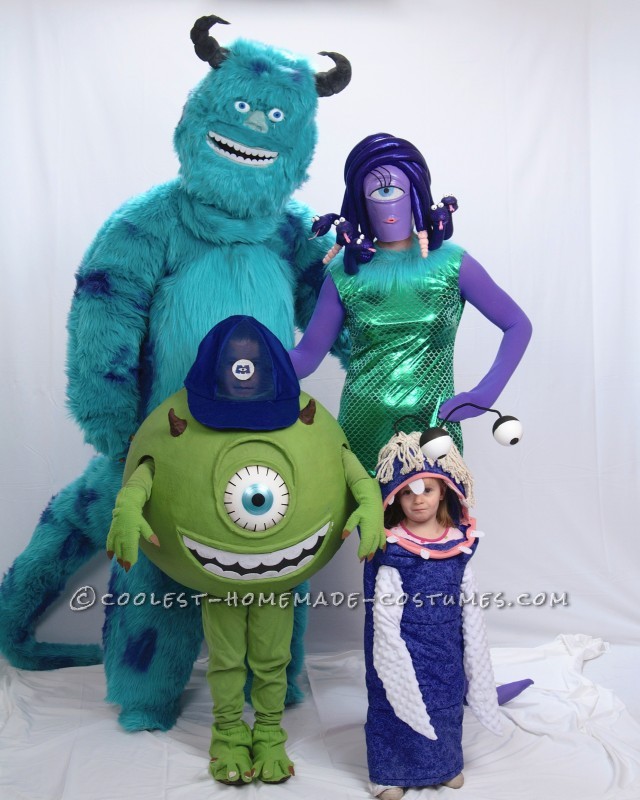 I started with the “Mike” body using paper mache on a 4’ diameter weather balloon.  (I made sure when I inflated it that he could still fit through doors.)  The eye is a hamster ball that my husband cut in half and then heated it to bend the edges out so we would have a surface to glue it on with, then I just painted the eye on the inside.  For the hat, I found a pattern at the fabric store for a baseball cap and used a copier to enlarge it 130%. I replaced the front panel of fabric with mesh so my son could see through it and painted the logo on it.  The arms and legs are just pajamas and I matched the color as close as I could to paint the body. I sewed the gloves and shoe covers and glued on some pieces of paper mache from one of my first, failed attempts at the body, for the fingernails and toenails.

I haven’t done paper mache since I was in elementary school, so it took me a couple tries to get it right. 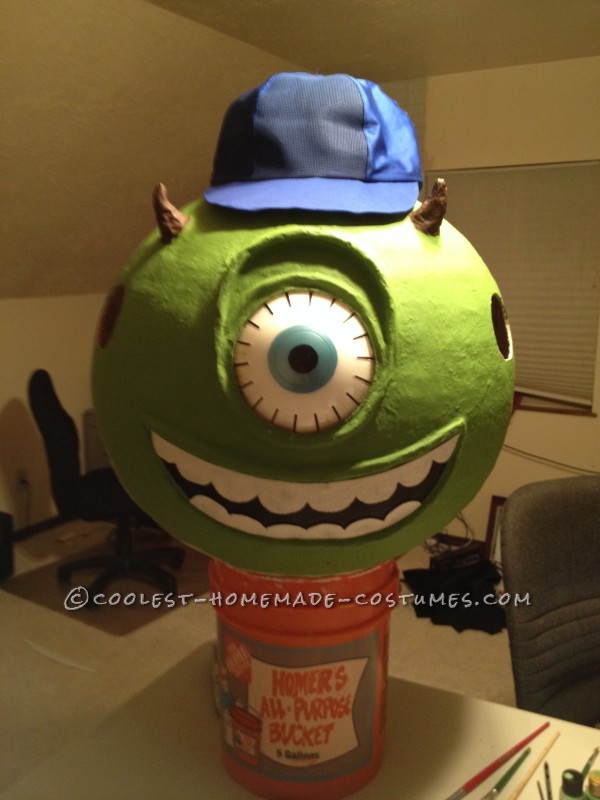 The “Boo” costume was probably the easiest one of all of them, though I wouldn’t have said that at the time I was making it.

I cut 2 pieces of fabric into rectangles to fit around my daughter. Then I sewed them together with batting in the middle and sewed lines across the middle to create the puffy look. Next I cut holes where her arms come out and sewed the sleeves on.

The head piece was a little more difficult. I struggled to figure out how to get the rounded shape to it. I ended up using electrical wire from Home Depot and sewed 2 pieces into the fabric going across horizontally and vertically. I also used this wire for the “lips”. The hair is a mop head that I trimmed up a bit and the eyes are Styrofoam balls attached to long cable twist ties. The head piece attaches to the body with Velcro so it can be easily removed. This turned out to be a great feature because when she got tired of wearing it, she would just flip it off, it was nice to be able to remove it so it wouldn’t get ruined. 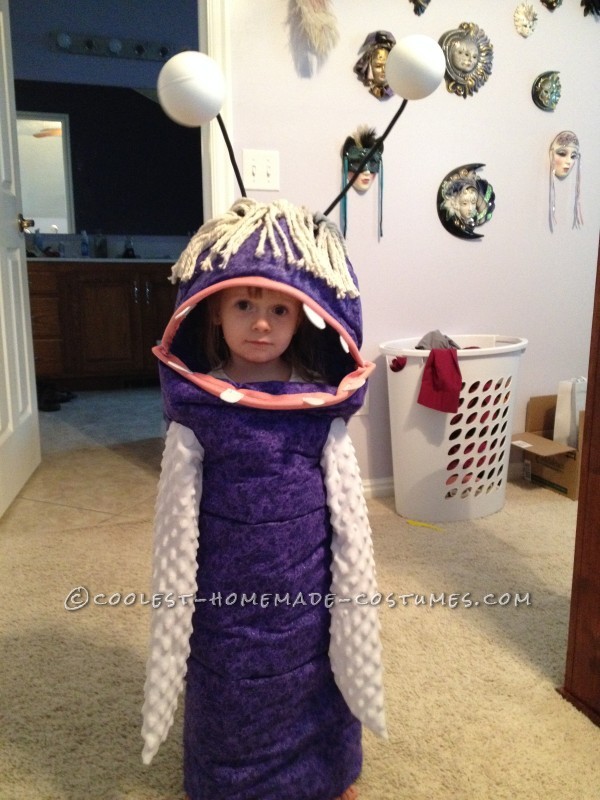 Now for the fun part. I racked brain trying to figure out how to make “Celia’s” head. I started the wig of snakes with the same wire from Home Depot and put it in pipe insulation. The problem with this was that they were way to stiff and thick. I couldn’t get them to coil up nice and tight. So I postponed that part while I tried to figure out her mask.

I tried paper mache again but I couldn’t get the shape right.  That’s when my husband stepped in and went to the special effects store. He brought home some molding clay, plaster of paris and liquid latex. He molded the head with the clay, then used plaster of paris to get a negative, then coated it in liquid latex tinted purple with paint.  Once dry I tried it on, well attempted to anyway. It was so tight and the latex does not slip at all, it was pulling my hair and smashing my nose. We ended up cutting off the entire back side and trimmed the neck up to the chin.

For the snakes I found an old wig we had laying around and cut all the hair off. This gave me something to sew the snakes onto. I ended up just sewing tubes with spandex and stuffing them with batting. I took some Styrofoam eggs and cut slits out for the mouths and glued on some little Styrofoam balls for the eyes and foam sheets cut into tongues.

The dress was pretty easy for the most part. I found a pattern for the dress at JoAnns and used some cute scaly fabric they had. I ordered three pair of lavender tights online and sewed one pair into the armholes of the dress. The other two pair I used for the legs. The biggest problem with this was the sleeves being sewn in. It was difficult to use my hands and with all the velcro on the other costumes, the nylons kept getting snagged. The only way to get to my hands was to take the dress half way off. 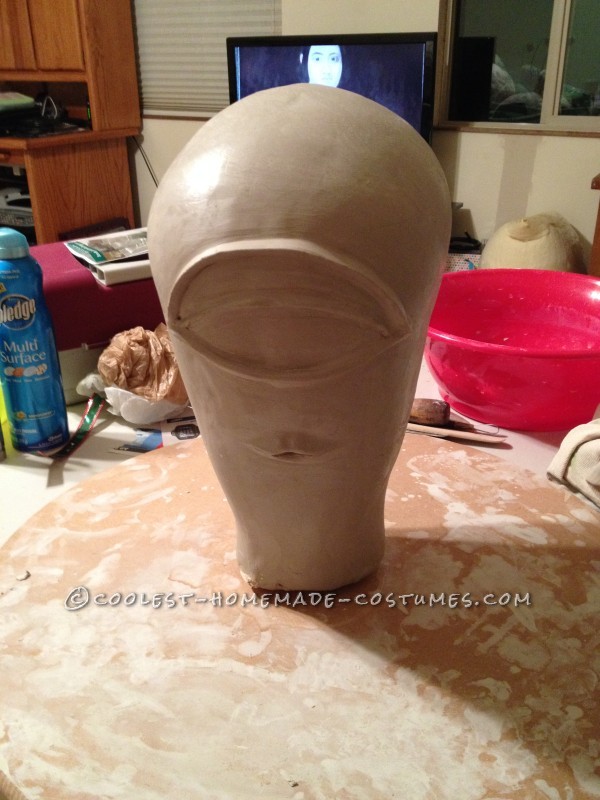 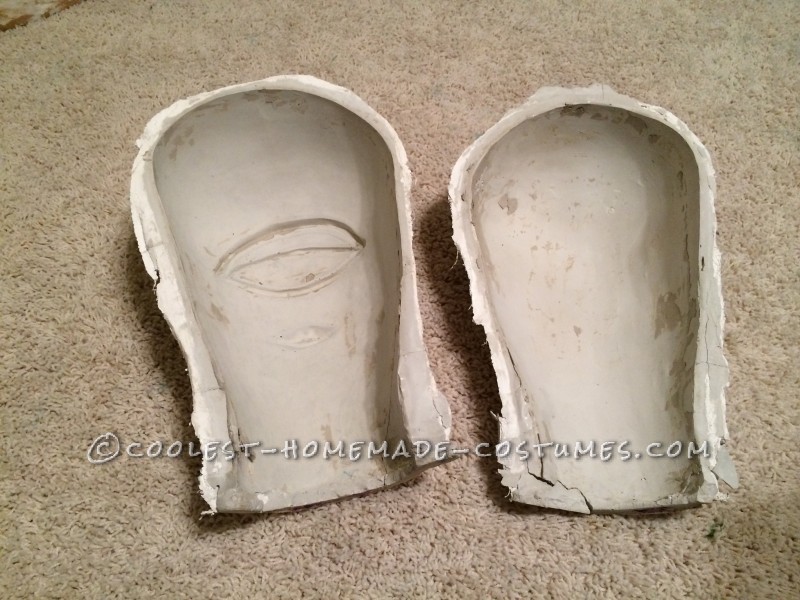 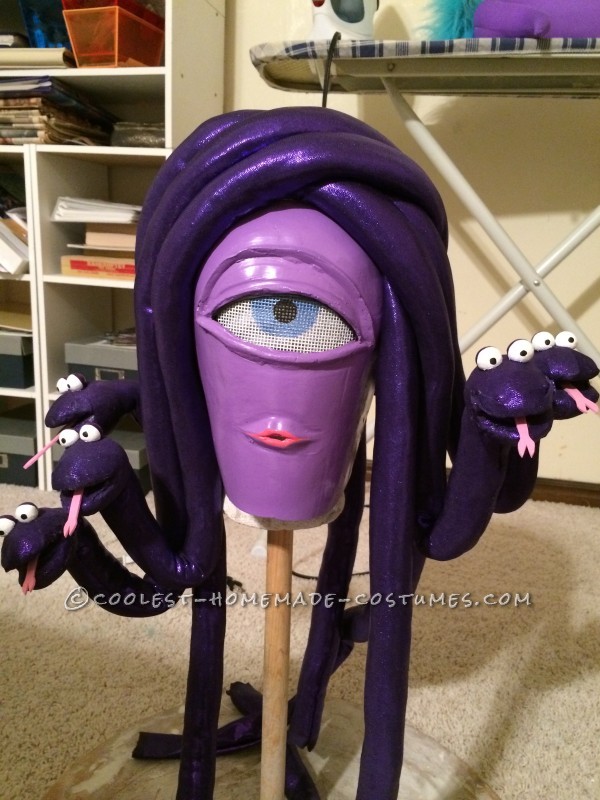 I convinced my husband to make his costume himself, once I realized I had bit off more than I could chew.  Later I wondered if this was a bad idea after he broke 7 sewing needles and bent 2 others and he clogged up my hot glue gun with Faux Fur.  He made a bigger mess with his one costume than I did with all three of the ones I made put together.  By the time he was done it looked like a turquoise bomb went off in my craft room.

Anyway, he made the body with a pattern for a costume lion and just modified it to look more like “Sulley”. The fabric was so thick and heavy, this is where he broke all the needles.

The head was interesting to say the least.  He found some expanding foam at the special effects store, poured the entire contents into a garbage bag and let it expand as big as it would go. He then used an electric carving knife to carve out the shape of the head and hollow it out.  Next he hot glued on the fabric and some squishy balls cut in half for the eyes.  He cut the horns out of foam padding and tied thread around them to give them their shape.

He made his costume extra large so he could stuff it with pillows to try and be more proportionately correct. Because of this, he can only wear the costume for a short period of time before he’s dying of heat and exhaustion. 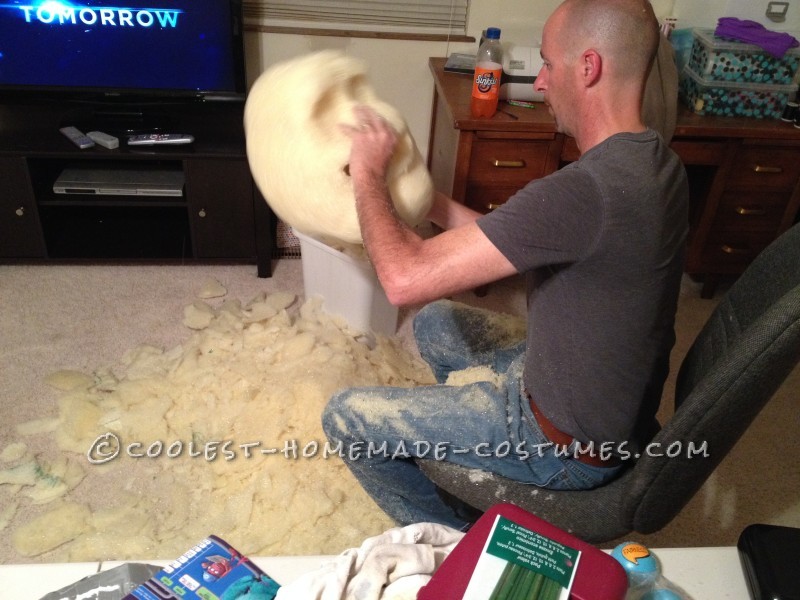 Note the huge mess on the floor 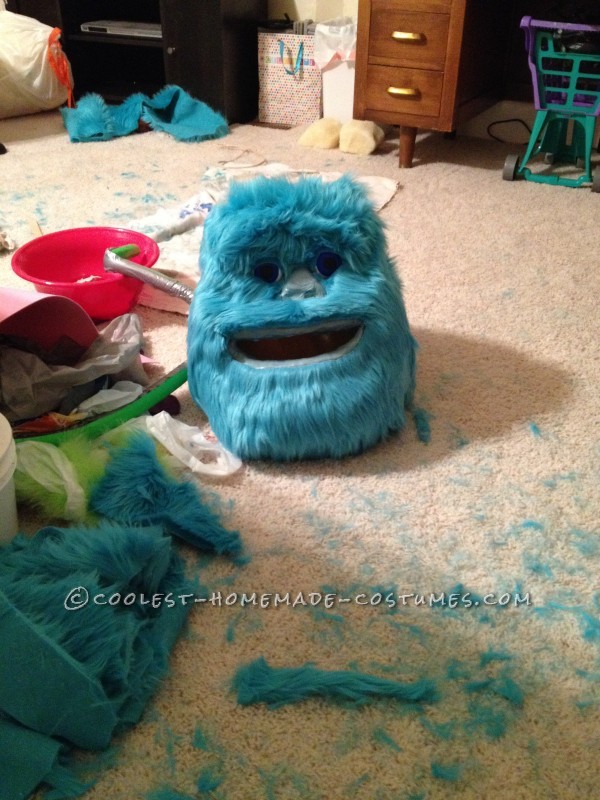 We got some great responses from people with these costumes. My son was a big hit in his school parade. His teacher said he had the “Costume of the year”. He loved getting all the attention. Everyone was amazed that the costumes were home made. People we didn’t even know were stopping us and asking if they could take pictures and asking how we made them. 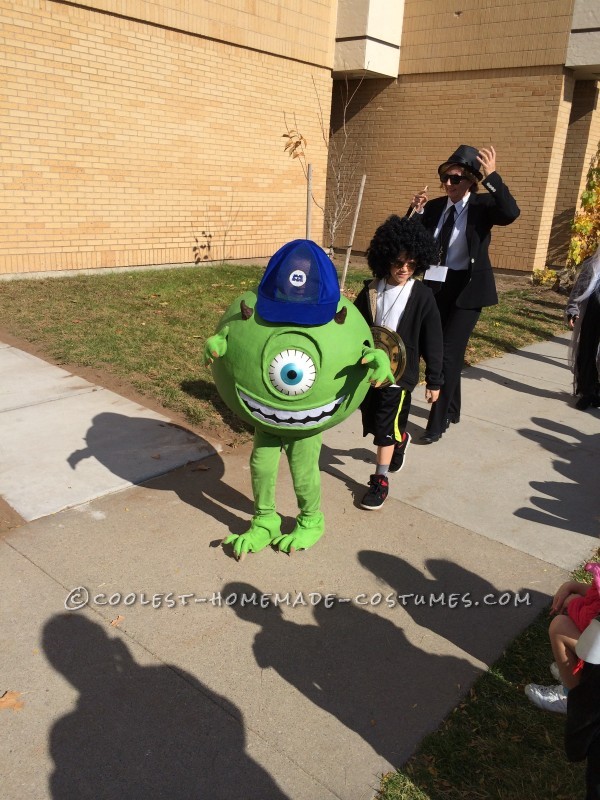 How will we ever top these?

We had a lot of fun making these. Neither of us have had any experience with this sort of thing and we had no idea what we were getting ourselves into. I have been to JoAnns more times in the last 2 months than I have in my lifetime. Knowing what I know now, there’s definitely things I would do different, but I would do it again. I’m already looking for ideas on what to do for next year, just need to start earlier. 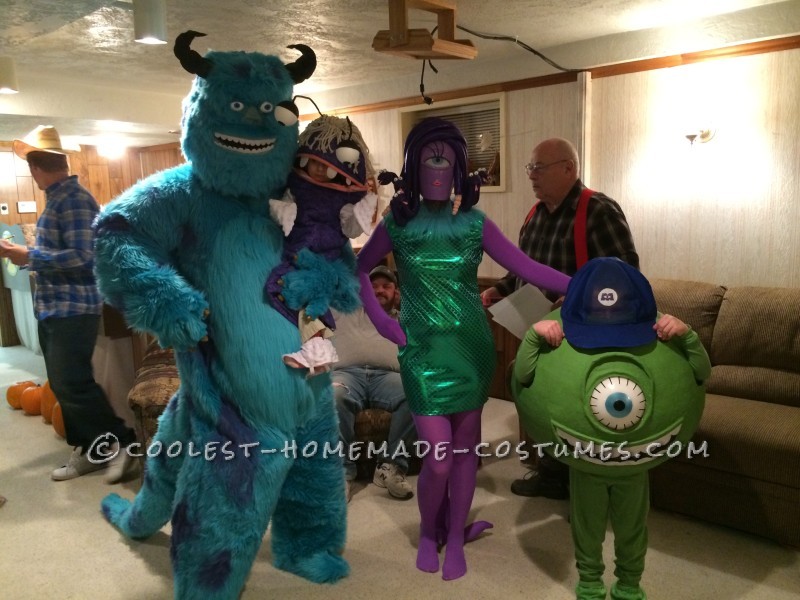