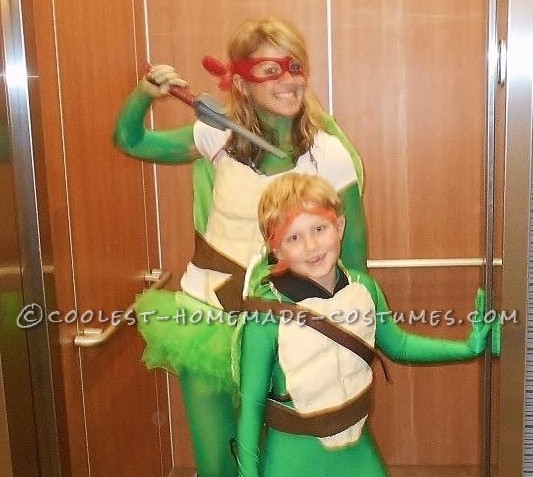 I made these Ninja Turtles costumes because I have been a Ninja Turtle fan for as long as I can remember. Being a single parent to an 8 year old son, I was tired of the superheroes every year, so I talked him into being a Ninja Turtle before the movie came back out this year.  He was totally on board with the idea, but it was a priceless moment when he saw how far I had taken it.

I took an old muscle Batman costume and molded some wire mesh to get the muscle look and then had him lay down to fit it exactly to his body.  I did the same thing  for mine.  Then I used newspaper and Plaster of Paris to cover the mesh, When dry I painted it (about 24 hours).

The shell was a little more time consuming.  I again used the mesh, but had to use a stronger (floral) wire to actually make the outline of a shell that was proportionate to our bodies and then cover it with the  mesh.  I tried to simulate the shell like pattern or texture when applying the Plaster of Paris and newspaper to mke painting a little easier.

In order to make it comfortable for him I took an old backpack, inserted the pack part inside the shell and used the bendable wire to secure it and took the chest plate and secured it to the straps on the front so he could easily slip in and out of it.  The chest plate was held down in the front by the faux leather strap I had purchased at the fabric store along with the other accesories.  As for the green bodies, we used a green full body suit for him and I wore tights and green paint on my arms and neck.

The costume took about 3 days total to make but it was worth every minute. 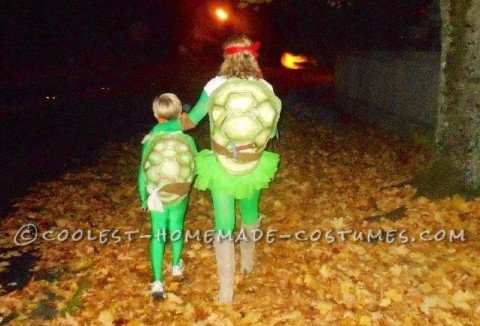