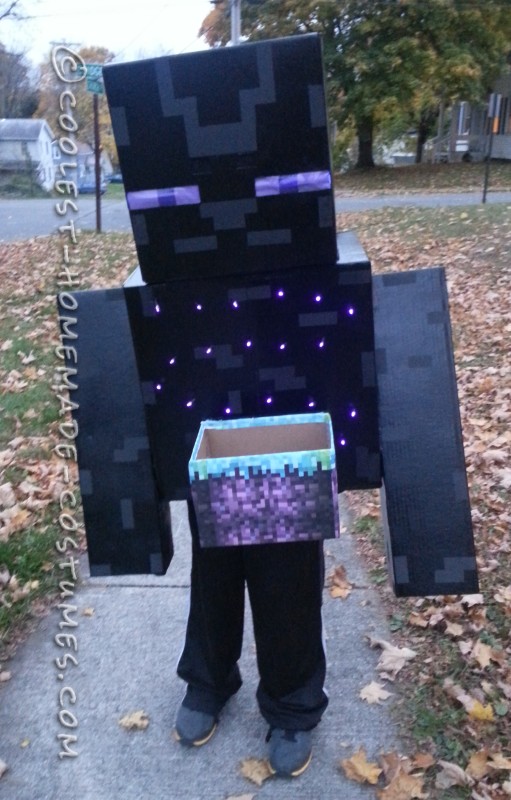 For my 10 year old Minecraft loving son I made an Enderman costume.

I purchased two boxes from Staples for the head and body and one from the UPS store for the arms. That box was very long so I was able to cut it in half and use it for both arms.

Once I had the right size boxes I spray painted them all matte black. Then I assembled them and cut eye holes for him to see and eye holes for the pink/ purple transparent vinyl. The eye holes for him to see were above “Enderman’s Eyes”. Once I made all my cuts (including cutting the arm box into boxes) I used blue painters tape to create the two tone Enderman coloring. I put the tape where I wanted the lighter black color. Once the tape was all over the head body and arms I did two coats of glossy black spray paint over the entire body. After this dried I took off the painters tape and I had the two tone effect.  I purchased adhesive vinyl in a package of rainbow colors.  I used two purple colors to create Enderman’s eyes.

Since my son was actually looking out of holes above these areas, they did not have to be transparent. So that you would not see his eyes I used black tulle inside the box for his actual eye holes. I purchased two purple flashing dog collars. I cut the light strip out of the collars. It was actually pretty easy. One snip and it pulled right out. I used black duct tape to tape it inside the costume right against Endermans eyes. Each collar had ambutton where you could make the light strip flash fast, slow, or constant. I used my glue gun to stick it to the inside of the box.

I used purple flashing battery operated lights from Amazon for the body. I had to wrap the tips with painters tape and then spray paint the string matte black. The actual string was clear. It took a couple of coats to make it nice and dark. Then I used a knife to cut tiny holes in the body and poke the lights through. I used a sharpie where the brown was exposed from poking holes. I used black duct tape to tape the light string inside the body. I used my glue gun for the battery pack. Then I cut holes along the arm boxes and the sides of the body. This was for his arms. He could move his arms into the arm boxes but the arm boxes were fixed to the body with a glue gun. Lots of glue. I burnt many a finger tips gluing these arms on well. I used two Velcro strips on the underside of the head so it could attach and detach from the body. I used a small box “wrapped” in grass block paper I printed on my home printer. I then glue gunned the grass block to the body. It was his candy box. I used lots of glue. His costume was a big hit at school and while trick or treating! 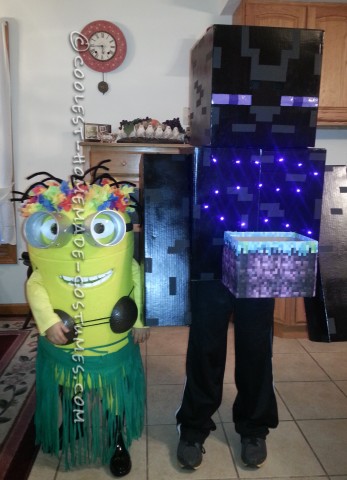 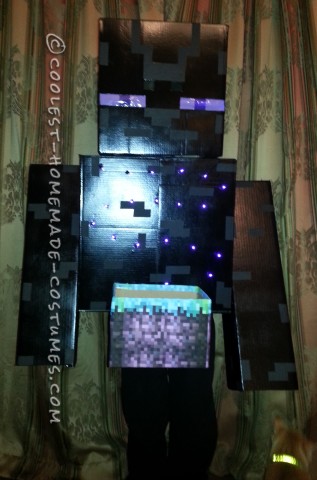 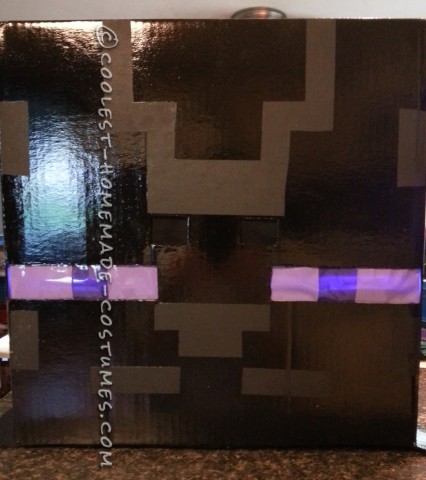