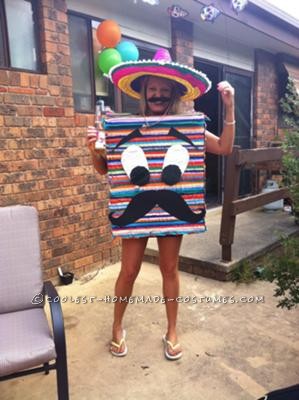 I had a Mexican themed party for my 30th birthday this year. I figured there would be lots of ponchos and sombreros so I wanted to wear something really unique. I spent a while going through my options – corn chip, chilli, jar of salsa and then finally decided to go in a Mexican Pinata costume. The whole reason I was having a Mexican themed party was because I love all the bright colors associated with the theme and a piñata was the perfect way to incorporate them into my costume.

I started off by taking a large cardboard box that was the right size to cover my whole torso, leaving my arms and legs exposed. I used a bowl to trace and cut holes for my head and arms. I then cut the entire bottom side out of the box so I could walk freely. Now onto the fun, colorful and fiddly part! I used about 24 rolls of streamers to cover the whole box. They weren’t all stuck on individually though – I took a piece of clear packing tape as long as the box was wide and stuck it sticky side up on a bench (tucking the ends underneath to anchor the tape to the table.)

I then stuck lengths of streamers along the tape, starting at the bottom edge and working up to the top of the tape. I ended up being able to fit about 8 lengths of streamer on each piece of tape. Then I carefully peeled the tape off the table and lay another piece of packing tape (sticky side down this time) over the top and frac14; of the streamer tape and stuck it to the box, working from the bottom edges up and doing each side of the box one at a time. It was quite a time consuming process but well worth it! I then made vertical cuts evenly all over to add to the piñata effect.

I made my piñata face out of cardboard. The eyes are covered in streamers, done in the same way as the rest of the body. I intended to cover the mustache as well but ran out of time. I added a store bought sombrero and I was done!

In action, the costume looked amazing if I was standing up or dancing but I found out that sitting was an impossibility!! It did make for good photo opportunities though as you can see in the attached photo! Drinking and eating were also a little bit difficult as the dimensions of the box made it hard to get my hands to my mouth – but where there’s a will, there’s a way – so I made it work!! 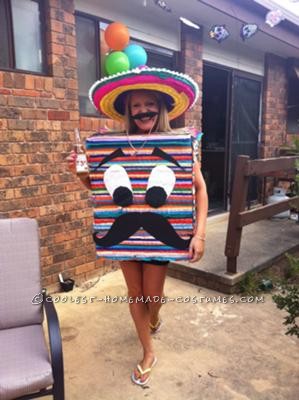 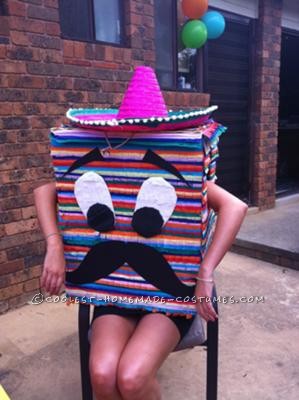 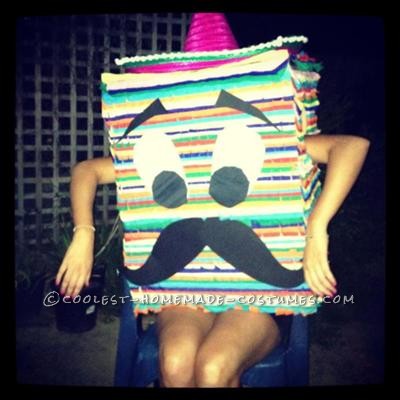 The Best DIY Pinata Costume Ever!