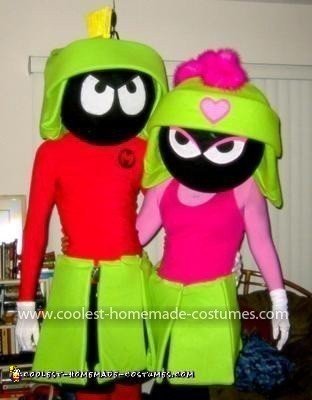 My wife and I love Halloween and we wanted to top our previous year costumes (which were The Joker & Harley Quinn). We came across a picture of Marvin the Martian and agreed that would be a great to try and make a Homemade Marvin (and Marsha) The Martian Couple Costume. Since we like dressing as a duo, my wife decided to make a girl version – we called her Marsha.

Figuring out the heads was the hardest part of the costume. After all, how do you make a giant black orb with eyeballs in real life? My wife found a company that makes hollow Styrofoam balls. We bought one, spray-painted it black, and cut that in half for the two faces, then bought a bunch of ½-inch thick foam to surround the head and make helmets. Since we were making cartoon characters, we wrapped the foam in green felt to give it a plushy look. We used fabric glue to stick it all together, made additional strips for the tabards (belts arounds the waist), ordered novelty slipper/shoes for big, cartoony feet, and used red and black duct tape for detailing, then wore tight athletic wear for our “skin,” and voila, a pair of martians!

Tabards: Foam cut out into long trapezoids, covered with the same green felt as the helmet. Also made belt loops out of the felt and used our own belts to loop it through.

Eyes: Cut small holes out on the Styrofoam ball so that we could see (it was still hard to see though!). Used 2 layers sheer white fabric for the eyes and glued that onto a cut out frame from construction foam sheets (called ‘Foamies’ at Michael’s). The pupils are black foamies.

Clothes: UnderArmour athletic wear long sleeve shirts – red for Marvin, and pink for Marsha. Opaque stockings for legs. Marvin also wore black basketball shorts for modesty’s sake. White gloves – the kind you can find at any Halloween store. We also made the Marvin logo on his shirt from foamies and pinned it over the under armour logo.

Shoes: Bought white novelty slippers from buyhappyfeet.com and used black and red duct tape to create the look of a sneaker. 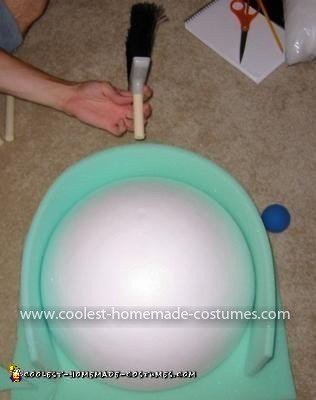 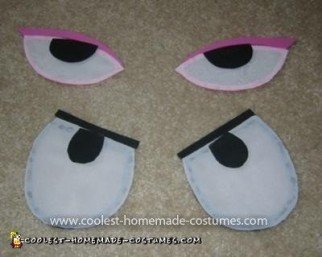 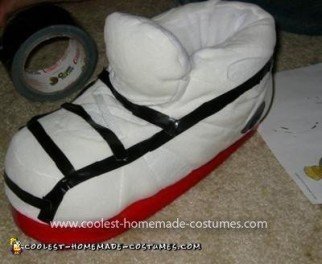 Cute Homemade Marvin the Martian Costume for a Woman

Coolest Marvin the Martian Halloween Costume for Under $20

1 thought on “Coolest Marvin (and Marsha) The Martian Couple Costume”