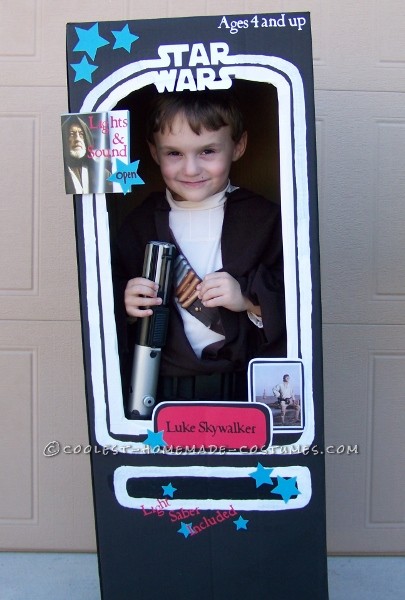 I purchased this Luke Skywalker costume last year and then decided to update it for another years use. That’s when I came up with the idea for a collectible toy box.  It was a big hit and lots of fun. My son was definately the hit at the downtown costume party and everyone loved it.

To make the box I painted a large box black and then added the white stripes on the front with white paint. I cut out the opening in the front. I cut out letters with my cricut and applied them to the box. Last, I attached a musical star wars card to the box with the words “lights and sound” and “open”. It gave it that action figure feel. Real sounds! I added a printed picture of Luke Skywalker to the front of the box and the words “light saber included”. My son carried a light saber inside the box with his costume on. I thought I was done but then realized that when he put the box on it had to balance on his head…not good, so I came up with a plan. I used a long paper tube like a gift wrap tube and I secured it to a utility belt with hot glue and twine. On the top of the tube I glued on a square of cardboard like a little platform. I did some measuring with my child. I had him put the belt on before I decided how long the tube should be to support the box over his head. When the belt was clipped on the tube went up behind him and the top inside of the box balanced on the “platform” on top of the tube. I put the cape on over the tube and belt and it didn’t show at all. I cut the bottom of the box a little shorter in the front to make it easier to walk. My son was 4 at the time and wore the box all evening  with no trouble.

The cloth part of the costume was storebought but the head and box were all homemade. This was a great costume that didn’t cost much and was well worth the effort. Everyone loves StarWars and young and old alike were fascinated. 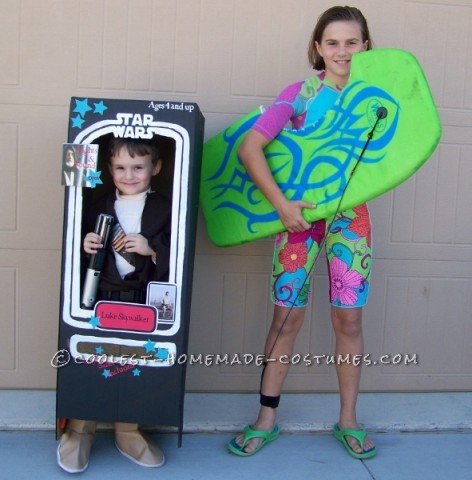