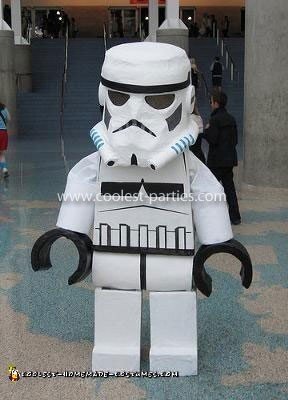 This Homemade Lego Stormtrooper Costume was worn at Anime Expo at the Los Angeles Convention Center in July of 2010. It was really fun to make, and I had a tight deadline as I had come up with the idea merely 4 months prior to the event. With many trips to Lowe’s hardware for supplies, and moral support, I pulled it off and the costume was a great success and has become quite the searchable costume on the internet!

I measured an actual Lego minifig and calculated the ratios as best I could. I went to the hardware store and bought large sheets of Styrofoam (classified as insulation material) and had to cut them down into panels to create the body, legs, and the frame of the belt area, according to my measurements.

The body was 4 panels hot glued and taped together, with U shaped cutouts for my arms to come out. The legs were put together in the same fashion, with extra panels for the protruding feet. The rounded belt area was two U shaped Styrofoam cut outs, which where then wrapped with poster board to give it the rounded look that it has.

Next came the head, which was a bit more challenging and can be compared to sculpture art. I stacked about 10 or 12 panels on top of each other, giving myself roughly a block of Styrofoam. From here, I slowly shaved away with a knife and sandpaper at the block to carve out what would be the general shape of the stormtrooper head. This not only included rounding of the dome, but the facial protrusions and valleys as well. This was challenging because they had to be as symmetrical as possible!

Next came the eyes, and head hole so I could wear it and see out of it as well (very important!) I carved out the eyes from the head, and cut out smoke tinted clear folders from office depot as the lenses. Although the lenses were not pitch black, there wasn’t any light within my helmet (further enhanced by the use of black cloth lining inside) so you could not see in, but I could see out just fine. Flipping the head upside down, I carved myself a hole just enough to align my eyes with the lenses so I could see.

The tube around the head was made from a swimming tube accessory bought at Ralph’s for 2 dollars, wrapped around the helmet and taped securely. The hands were made similarly to the head, as I stacked multiple sheets of foam, cut and sanded into a cylinder, then cut an inner-circle out of the cylinder to make the claw. I cut two small slits for my fingers and thumb so I could hold the claw with my hands (wearing black gloves to blend in with the black paint of the claw).

Next, paper mache everything for a smooth texture. A lot of sta-flo and newspaper was used to cover the entire head, body, and legs of the costume. One layer did just fine to hold everything together. I made sure to use small strips to get as smooth a texture as possible.

After a day of drying, I did a once over on any bumps or lumps in the mache and touched it up. Now it was time to paint paint paint! White acrylic was used over the entire body and head. This was applied with a paint brush. Two layers did the job well done. Afterwards, the details on the chest, belt, hands and back of the costume were painted on with sponges, and a couple of brushes using black acrylics.

Last but not least, arms, legs, and assembly. The arms had to move, so I could not make them out of Styrofoam. I went to JoAnn’s to get some white felt, and foam padding sheets that I could roll up to make a hollow cylinder. I wrapped the cylinder around my arm (only up to about my bicep) to make sure it would fit, as well as go with the hand. After that, I wrapped it with string and taped it to make sure it would hold it’s place. It was then wrapped with the white felt and the area from my bicept to shoulder had no padding, as I needed to move them around. This allowed me to do various poses and raise my arms as Legos do! For the legs, I actually installed old shoes into the bottom of the legs and made them secure by surrounding them with Styrofoam blocks. This allowed for me to walk with the comfort of knowing that my legs weren’t twirling around backwards as I walked forward.

When I got to the convention center, I put on the costume and off I went! I was a big hit, a lot of kids walked up to me to have their parents take pictures of them, as well as other fanatic Sci Fi fans and Cosplayers as they are called. It was a great costume and is now retired and standing in my living room, awaiting its next big event! 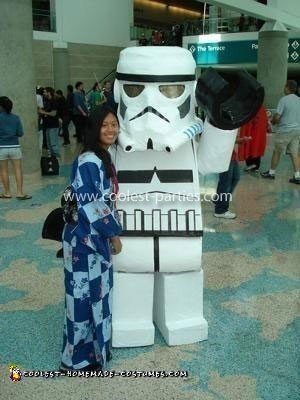 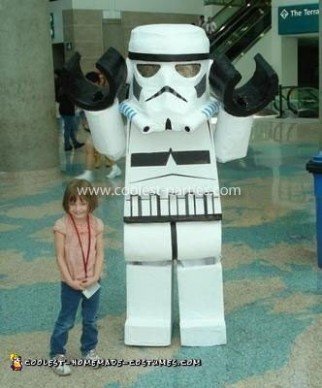 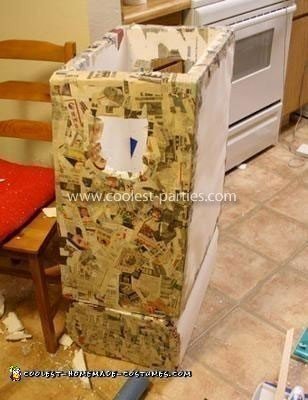