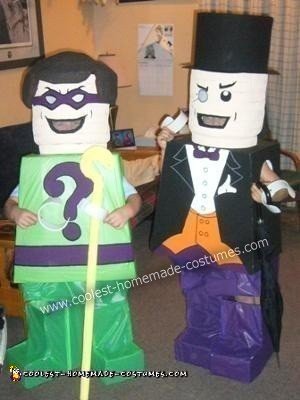 My boys love playing Lego Batman on the wii and on their DS. So this year they asked me if I could make Lego Penguin and Lego Riddler couple DIY costumes… YIKES!! I have never made a costume before, so much easier to buy it..lol. But even though these took me several weeks to finish they were kind of fun to make and everyone’s reaction when they saw them was definitely worth it!

I measured the kids and printed a picture of each character then made a grid on the pictures and figured out the ratio that I needed to go with to make it look like a proper Lego man. I glued and taped together boxes for the body and cut out head and arm holes. Riddler is covered in a green plastic tablecloth and the question mark and belt is painted. I painted Penguins body.

The legs were a little more difficult… I glued and taped them together as well as the feet and covered with more plastic tablecloths… to be honest the costumes got torn apart and redone several times..lol..

The heads are Styrofoam circles glued together then hollowed out. Also cut out the monocle hole on penguins and the eyes in the mask in Riddlers and covered with tissue paper and put a glow stick behind so they look like they are glowing. Cut out the mouths and put mesh so the boys look out the mouths. Then I painted the faces.

Riddler’s hair is made out of more Styrofoam circles, cut slightly larger and stacked to go smaller and sanded and cut to look like hair and painted dark brown. Penguins hat is cardboard and bristol board painted black and taped on the head. The hands are plastic pipe cut and screwed to a cut up wooden mop handle so they can hang onto them.

Penguin is just carrying a black umbrella and Riddlers cane is made from a cut hockey stick and bent clothes hanger to make the question mark. Then covered in tissue paper and painted yellow… and that is it! 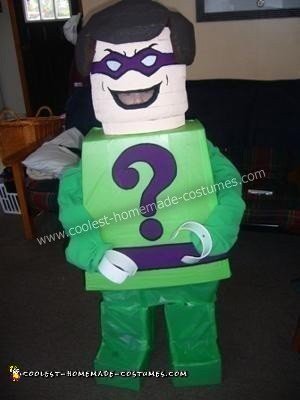 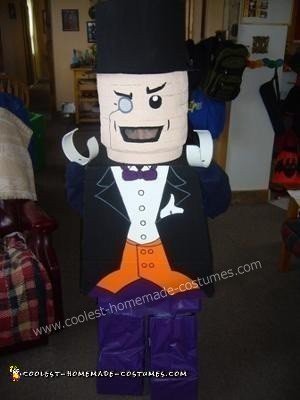