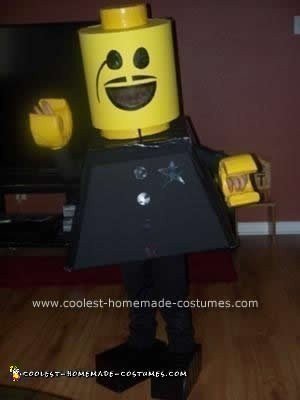 This Lego Cop DIY Halloween Costume was by far the funnest costume that I’ve made so far! I started from the head to the toe. I used pre cut Styrofoam for the head. One whole circle piece for the top and 2 hollow circles for the neck (different sizes- SM bottom, LG top). I attached the top of the head with the neck together using yellow posterboard. Before you attach the poster board, go ahead and color your face on it! I used mesh fabric to go over the mouth on the inside so he could see.

For the very top of the head, I used two small Styrofoam circles and covered them with yellow duct tape. The rest of the head (Styrofoam) was covered with the remaining yellow posterboard. I used Velcro to hold all the pieces together.

Next I used black foam board for the body. I measured a mini Lego man and scaled it up to size for his body. I cut it out and secured it on all four edges with black duct tape. Cut out a hole for the head and the arms. I used silver posterboard for his buttons and sheriff badge.

For the hands I cut out circle Styrofoam and used yellow duct tape to completely cover it. Then I cut out a circle only big enough to slide his hand through. I attached posterboard to make a tube that goes through the hole of the Styrofoam for his hand to fit into. He wore a black long sleeve underarmour shirt that was tight around his wrists to keep the hands on!

To make the feet, we just cut out a shoe box using black foam board and secured it with duct tape. Just like the hands, I cut out a circle big enough for his foot to fit through and a black piece of posterboard to fit inside that hole to keep it on his leg. He wore black baseball pants, again to keep the shoe boxes in place. 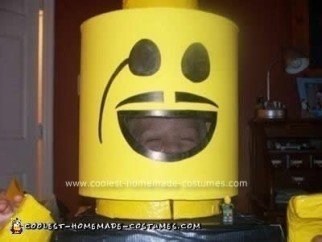 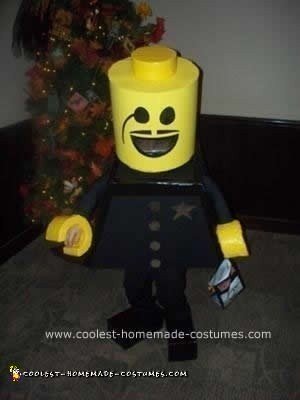 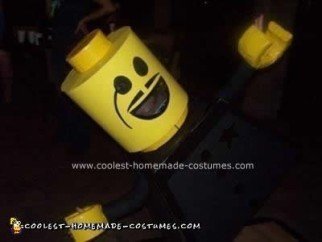