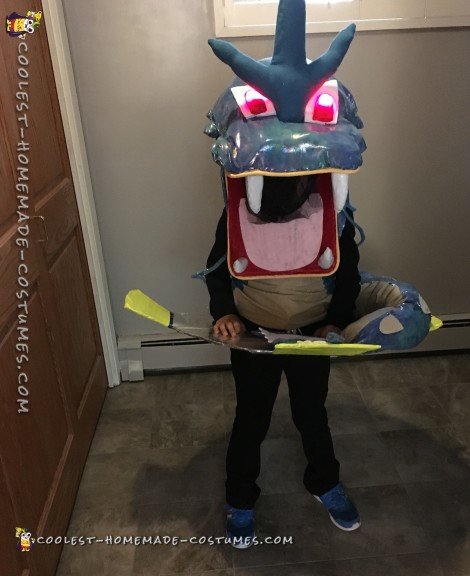 My decision to make a Gyarados Pokemon costume was a no-brainer.

Our oldest son just started first grade and is absolutely obsessed with PokemonGo. As a result, it gives us something fun to do together every few days!  Gyarados is a pretty cool pokemon so I agreed to try to make him this Gyarados Pokemon costume.

We picked out a spandex-type fabric to look like sea serpent skin and stuffed it with assorted toy stuffing.  I was trying hard to make sure it didn’t look like a dinosaur so I decided to make the Gyarados Pokemon costume on top of a Pokemon gym.

My structural challenge was to make sure the gym would all hold up.

I ended up using an old, small, mostly broken backpack. After cutting off the bottom, I cinched it to be as narrow as possible, and then pinned the tail to it.  Using carabinder clips, I was able to hang the backpack straps from the gym. I created grabbing handles on the inside circumference by using a fishing line. In order to stabilize the angle, I crisscrossed the fishing line around the gym.

I made a hole in the back of the shirt like a keyhole in order for it to wrap around the tail. I then secured it underneath with velcro.

For the head, I took a scooter helmet and covered it with the same fabric and stuffing. For the eyes, I added red LED lights which made the whole costume really pop on Halloween night.

My favorite reactions were hearing the happy screams of “GYARADOS!!!” from so many other PokemonGo addicts, both young and old.

Once it got dark some older kids stopped and watched the costume go by saying “Gyarados!  And he’s floating!”  Which was the exact effect I was going for.

I definitely recommend making this Gyarados Pokemon costume. It was as if I brought Gyarados to life for a celebrity appearance in our little neighborhood this year, and it was a blast! You’ll find more Pokemon costumes here. 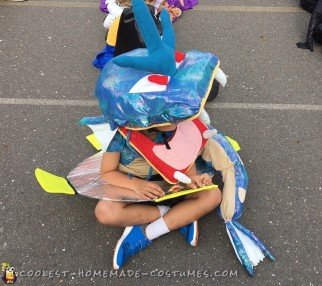 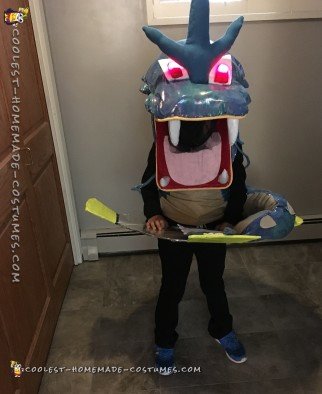