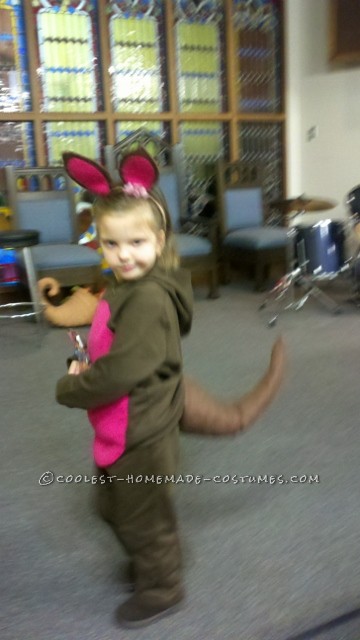 When my very independent daughter came home saying that she needed to dress up as her favorite book character, I thought, OK, Fancy Nancy? Amelia Bedlia? Hello Kitty? No. Of course not. Only a Kanga Kangaroo Child Costume would do.

Off to Wal-Mart I go. First I needed brown sweat pants and jacket. That was easy. Next, pink and brown felt. Again, easy. I bought 3 yards of each. That was way too much. Then I had to find a headband with cat ears (or something similar). I found this in our play room and a bonus…it had a pretty pink flower on it.

The ears would make or break the look. Thank you Google Images. I looked at several kangaroo images to get the look and relative size of the ears. I free-hand drew them on the brown felt, then reproduced it, reducing it slightly onto the pink felt. Hot glue held them together and I placed them right over the cat ears and hot glued them to the head band.

Next came the tummy. Using a dinner plate, I traced 2 side by side circles and connected them with a straight line, making an oval. I sewed that onto the hoodie jacket, covering the zipper and hanging slightly below the elastic. Then, using the same dinner plate, I traced another circle and folded it in half, making the pocket, and sewed it on.

The tail took some thought. I had to watch a few videos of how the tail is used. I practiced on paper first until I felt confident. The trick is making it thicker at the point of attachment. Otherwise, it looks like a cow tail. I sewed it inside out, end to end, leaving an opening at the attachment end. After turning it right side out, I used recycled shipping peanuts to stuff the tail but I suppose you could use plastic grocery bags or news paper. Attaching it the hoodie jacket took some extra stitches on the top but it worked out really well. We already had the brown boots. Thank you Target. They were perfect.

Roo in the pocket was was a last minute addition. We found an image of Roo that we liked, printed it and glued it onto a Popsicle stick. I’m sure someone else could come up with a better idea.

My daughter was very proud of her costume and it’s still fought over in the dress up trunk. Ba-bam! 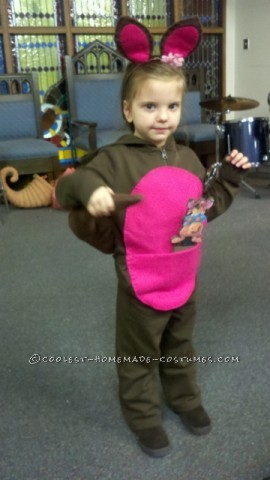 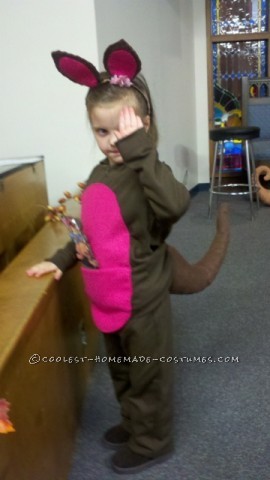