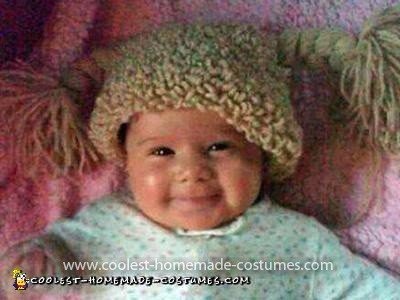 I was having a hard time coming up with a costume for my 10 week old daughter, Calista, and wanted something different than the typical jalapenos, ladybugs and tootsie rolls that were on the store shelves and would also incorporate her stroller in some way. I actually got the idea while browsing some of the costumes on this site.

I saw the Infant Cabbage Patch Kid Costume Ideas that others had made and was instantly nostalgic for my “kid” I had when I was a little girl. I knew that she was going to be a Cabbage Patch kid for this Halloween!

I started with the wig. I took a knit hat I bought from a thrift store and a latch hook (the ones you use to make the latch hook rugs) from a craft store and started “looping” the yarn through the knit hat.

For the braids, I marked two circles on the hat where I wanted them and pulled the yarn longer to make really long loops, cut the bottom of the loops, made the braids, then tied it at the bottom. I pulled the yarn fairly tight so that the braid would be stiff and stick out like the classic Cabbage Patch look. And then trimmed the bottom flat and added the ribbon to dress it up a bit.

The outfit was one that I had, though not my original choice, since the weather turned cold and I had to find a bigger outfit that would fit over a snow suit while trick or treating.

For the box, I started the day of Halloween, so it doesn’t look as finished as I had envisioned in my mind, but I was still satisfied with how it looked. I took a simple cardboard box and her stroller/car-seat combo and cut the box into the shape of the Cabbage Patch Kid box. I used double-sided sticky tape to adhere the pink wrapping paper to the inside and yellow to the outside.

I was able to print off the logo from the website and put it in the top and front. I laid a pink (matching the wrapping paper) blanket over her car seat to cover up the seat.

To finish off the effect, I bought a Cabbage Patch kid from the official CPK website (cheapest was $15 and the only way to get a customized birth certificate) and for an additional $3 you can customize a birth certificate with name and birth date. I didn’t mind because I figured we got a cute doll and keepsake of her first Halloween and that is what I would’ve spent on a junky costume anyway.

We got great reactions from everyone and she had a cozy, warm ride the entire trick or treating! 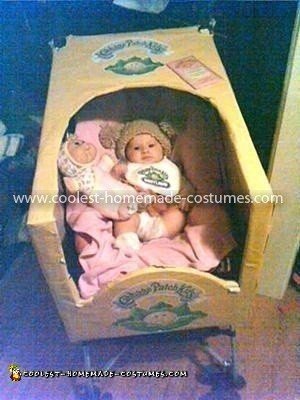 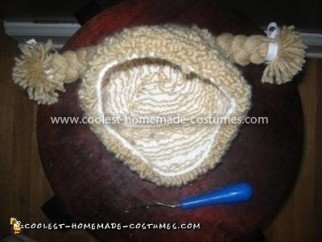 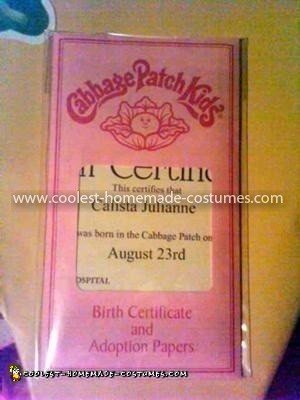 Cutest Cabbage Patch Doll for a Baby in a Stroller Costume