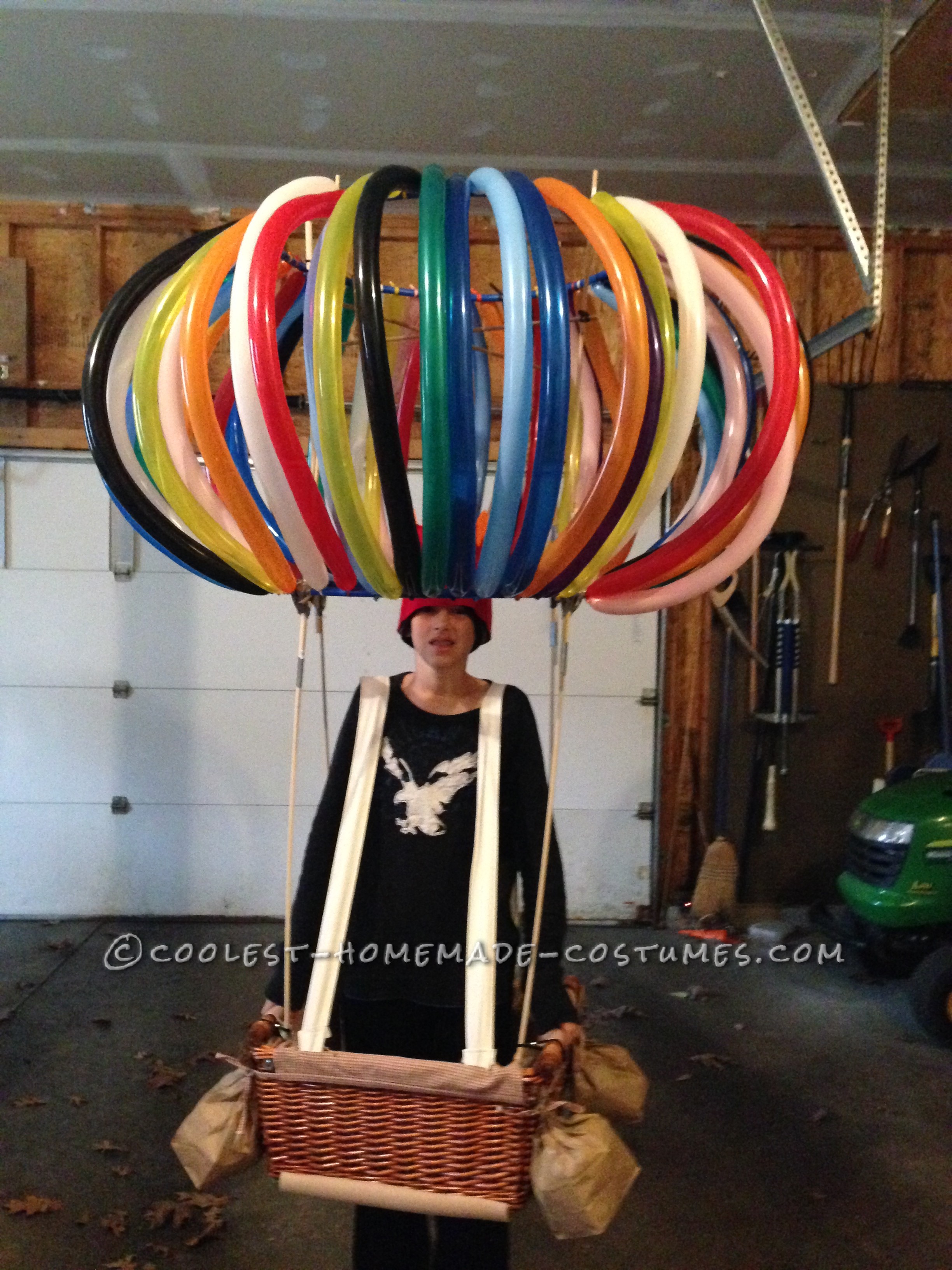 This year my 13 year old son wanted something different and original for a Halloween costume. I had seen a photo somewhere online of a hot air balloon costume similar to this, but it was on a much shorter child. The challenge for me was to make one for someone who is 5’4″. I started by going to a thrift shop where I found the perfect basket, some wood dowels, some piping insulation for the rough edged, some felt, and this stuff to make straps out of. I thought I’d be able to make it all on my own, but ended up a bit over my head.

First I cut a hole through the bottom of the basket. Then I put piping insulation around the cut bottom edges. Next I made a fire hat out of red and orange felt. I don’t sew on a sewing machine very well, but I can stitch with a needle and thread easily enough and in no time the hat was made. After a few measurements the wooden dowels were attached to the corners of the basket. At this point I was stuck! The dowels had to be so high because my son is so tall and the bottom of the balloon needed to begin over his head.  Everything was so wobbly! So after enlisting help, the dowels were fastened more securely by drilling triangle pieces of wood to the corners of the basket and zip tying the dowels to the basket for extra support. A guy at the hardware store gave me an idea for the hoops to tie the balloons to. It was PEX tubing that plumbers use instead of copper pipes. With that my husband helped me fasten the hoops to the dowels.

The next step was to put on the straps. Using my son as a model, I got the straps the right length, threaded them through the basket and sewed them into place with that handy needle and thread of mine! The day of trick or treating was the day we tied the balloons on. It was a very cold snowy, windy day on Wisconsin on Oct 31st. I put the balloons on in the garage for two reasons. First, I wanted the balloons to have cold air in them so that they would not deflate if they went from hot to cold air, and second, because this costume had gotten so large I knew it would not fit through the doors. Haha! Using a pump, I blew up the balloons and tied them onto the top and bottom hoops and then it was done.

It looked awesome and my son loved it. It was the best costume I’d ever seen, much less made. Everyone loved it. Some houses gave him extra candy for such a great costume and some even asked to get their pictures taken with him. The only bad thing was that it was so windy that it was a little difficult to manage. I posted his picture on my facebook page and right away it got 82 likes and about 30 comments (all positive). It is now sitting in my garage and we don’t know what to do with it. Hands down, best costume ever!