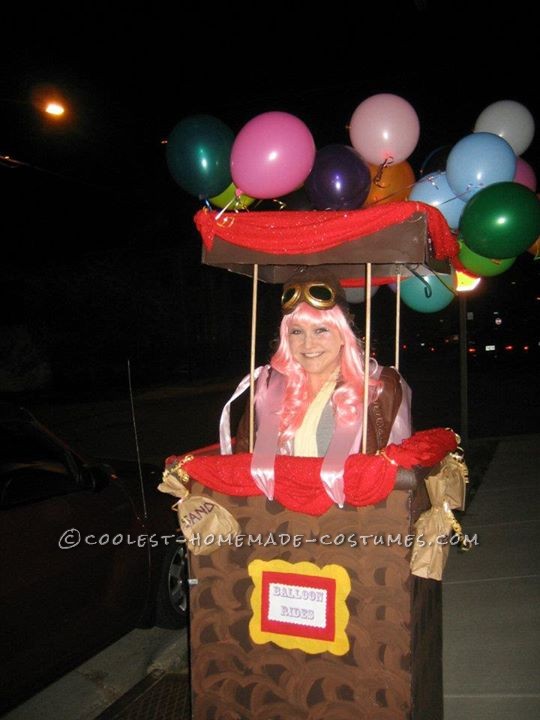 I had a great time making this homemade Hot Air Balloon Aviator costume, but it took me months!

The outfit was simple: I used a sweater, long light colored scarf, brown leather jacket, and pink wig I already had (colorful wigs make all costumes better!). The goggles were found online. I just wore jeans and sneakers underneath – no one really saw my feet, and I was comfortable.

The balloon basket was harder. I used corrugated plastic panels to form the sides, then glued three of them together in a squared-off “U shape.” For the front “door” panel, I glued hinges onto the door and sides and attached a latch so the front panel could swing open and closed to let me in and out. This was by far the most difficult part. I had trouble getting the whole thing to be sturdy because the fourth side wasn’t glued to all the other sides. I ended up gluing L-shaped brackets down all the sides for extra support. If you’re not planning to come out of your costume much, I would suggest just gluing all the sides together and lifting it over your head.

I spray painted all the panels brown, inside and out. I cut a slit in pool noodles lengthwise and fitted them over the top of the panels to make a rim, then spray painted them as well. I hand painted highlights onto the panels with a lighter and darker brown paint using a sponge brush to make a wicker effect. I poked holes through the panels and ran large pink ribbon through for the suspender straps, tying them at the top. Then I printed out a “Balloon Rides” sign, glued it to some felt and then glued that all to the front panel.  I made “sand bags” out of paper bags stuffed with newspaper and glued those on to the corners. For the final effect, I draped some red fabric I had on hand and glued it  on to secure it. And the bottom of the basket was done!

To make the top, I cut up a fifth plastic panel into four strips (making sure it was cut so that it was the same length as the basket), then glued them all together in a square shape. I made holes and threaded picture hanging wire back and forth through the top panels to make a grid. Then I painted it brown inside and out. I glued long wooden dowels to it, then ran the dowels down through the pool noodles and glued them against the sides of the basket for added security. It was actually pretty sturdy. The last step was to drape more red fabric, securing with hot glue, and then to tie on 30 balloons!

I think the key is to not be too stingy with the balloons – I thought 30 would be too many, and it wasn’t quite enough. It doesn’t look like 30 balloons in the picture! Besides, a few will pop or blow away.

Final note to people considering this costume: think long and hard about where you are going in this and how you’ll transport it. I had a hard time fitting through doors and was not allowed into some crowded businesses. I could only travel to a friend’s party because I strapped it into a convertible and drove very very slowly with it sticking up in the air. Then I had to figure out how to jam it into the group bus. It was also somewhat difficult to take off to go to the bathroom. So… give the logistics some thought before attempting! 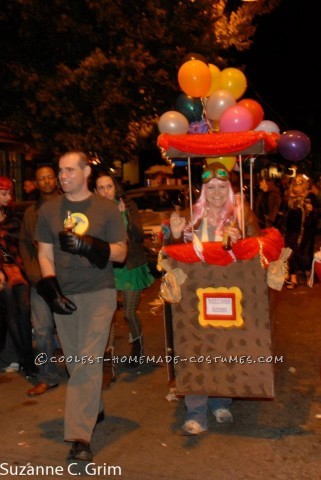 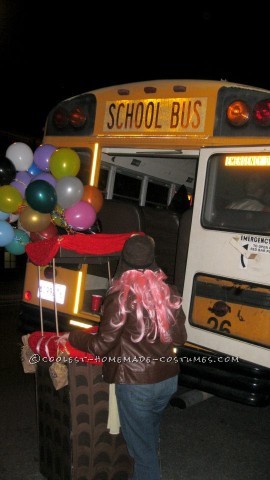 Coolest Hot Air Balloon Costume – Rise Up to the Next Level!