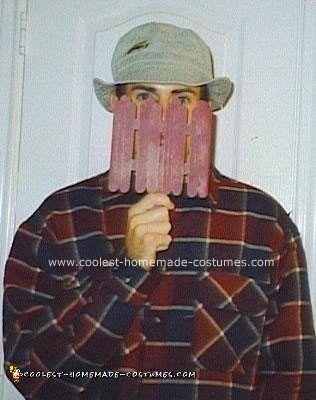 Wilson, from the TV series Home Improvement, was my crowing achievement in terms of little effort for great reward. I got tons of compliments for this costume, which is relatively simple. The biggest challenge was holding up the tiny fence for 4 hours. Mr. Wilson’s face can never be revealed!

I wore boots, long cargo pants, and a flannel jacket I borrowed from my dad’s closet. I borrowed the bucket hat from a friend.

The star of the costume is the fence, which was created from jumbo Popsicle sticks. I put 2 sticks together, then super-glued a stick to the back to hold them together. I slightly raised the center stick to create the reverse V shape you see at the top of most posts. After four posts were created, I connected them with two sticks laid horizontally. It’s important to leave space in between the posts. I spaced mine about 1/2” apart so as to reveal some of my face, but not too much.

After the horizontal sticks were glued to the vertical posts, I glued one stick vertically on the bottom center of the fence to use as a handle. I then primer’ed the fence once, then spray painted once with a maroon spray paint. For this application, I thought maroon was a better color than the traditional brown, but you may feel differently.

The fence was so mysterious that a lot of the people I had met at a big party didn’t recognize me the next day. The homemade Wilson from Home Improvement costume is a great and easy costume. Try it out!