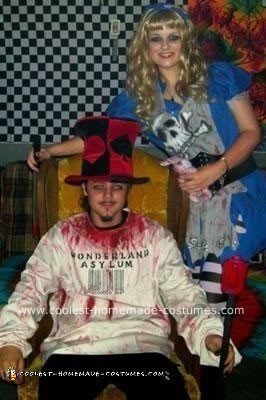 Me and my husband decided to have a Twisted Fairy Tale party for Halloween. As the hosts we decided to go as a Creepy Alice and Mad Hatter.

I took an Alice costume dress and made it my own by painting skulls on it and putting red paint on it for added blood. I replaced the cute ribbon with a corset belt and added white and black stripped tights. Instead of Mary Janes I wore tall combat boots to give it more of an edge.

My necklace was a coffin necklace. The wig I purchased online. I took the headband and added a skull I painted to the center of the bow. I also used paint to bloody it up. I carried a fake machete that was covered in fake blood paint and a stuffed animal rabbit that I made to look like I killed it. I sewed x’s over its eyes and cut open the stomach… I painted the inside stuffing with red blood to look more like guts.

I added fake blood on my arms. I used dark black shadows for my eye make-up to get that deranged smoky look. I also had a little bottle I carried around with me that I drank out of all night. I used Halloween letter stickers and put ‘DRINK ME’ on the bottle.

For my husbands costume I purchased a straight jacket and painted “Wonderland Asylum and a bar code on it” to give it a twist to being the “mad” hatter. I covered it in red paint to look like blood. He completed the look with his bondage pants. He painted a rod stick from the craft store and put a children’s tea pot to the top of it to look like a cane. Added red paint for blood.

He wore swirling black and white contacts in his eyes and we darkened around his eyes with black makeup. We completed the look with a Gothic red and black mad hatter hat we found at the costume shop. He drank out of a bloodied tea cup through out the evening.