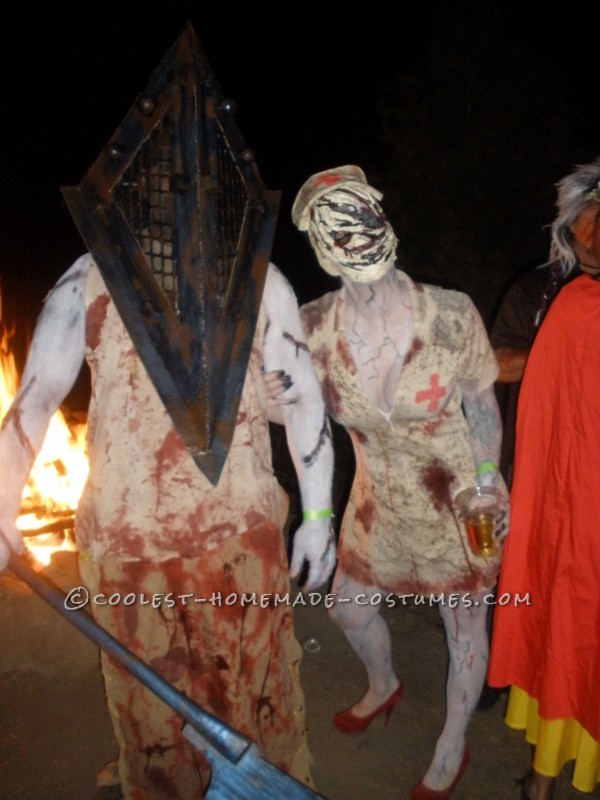 This year I wanted to make another creepy couples costume for my husband and I.  We’ve always loved the movie Silent Hill, and I’ve always wanted to be one of those faceless scary burned nurses!  So I started looking around the house for stuff I could use to make the scariest Silent Hill Nurse and Pyramid Head costumes.

I started with my mask.  I had some leftover plaster belly mold strips from when I was pregnant, and did a belly mold of my pregnant belly, I put a plastic bag over my head, (scary!), cut holes in the eyes, nose and mouth and tied in the back so it was tight over my head.  This way I could put the plaster strips on me with out it sticking to my face and hair.  I laid them out just getting a basic mold and a sturdy start to the mask. I let it dry on my head for a bit, and then took it off and let it dry the rest of the way on a table.

After that I made some simple paper mache, flour, water, Elmers glue and newspaper.  I then molded the paper mache on the plaster mask in the shape I wanted it to look like the Silent Hill nurse face. Let that dry over night and then began painting it with some acrylic paints. Voila! Faceless Nurse mask! The rest of the costume was a zombie nurse dress I ordered for $20 off the internet and I just dirtied up with brown acrylic paint mixed with water, and then my own homemade fake blood (recipe will follow). I also put some corn syrup on the shoulders of the dress and added real ash on them to look like the burned Silent Hill nurses dresses.  I then put white cream Halloween make up all over my legs arms and chest then a little grey over that.  After I drew on black veins all over my chest, legs, and arms to look like the nurses in the movie. That was it for me!

For my husband’s Pyramid Head helmet, I found a large enough box in our garage and cut out 3 pieces, 2 triangles and one back triangle piece.  I hot glued them together in the shape of Pyramid Head, and then added the trim at the bottom of the side pieces, also cardboard.  I spray painted the whole thing black, let dry and then cut out the triangle holes on each side.  I added some window screen on the inside of the holes, (hot glued) and gathered up the other pieces to make the decorative trimmings on the helmet.  For the handles I used 2 wooden dowels that I purchased at our local hardware store for less than $5.  And the square blocks at the ends of those dowels are “Don’t Break the Ice” cubes from my kids game. lol  I cut the dowels and then hot glued them to the cubes.  Then glued them to the helmet.

The 4 balls on the helmet are craft styrofoam balls I got at the hardware store for $1. I cut the bottom of them off and glued to the helmet. Then for the grate over the screen I used an old plastic baby gate that I just cut in the shape of the holes and hot glued it on.  I painted the whole thing black and then used some iridescent acrylic grey paint and gave it a metal sheen look.  Then I went over the whole helmet and used rust colored acrylic paint to make the “rusty’ spots all over.  For his arms I mixed flesh tone acrylic paint with white cream make-up and used a make-up sponge to cover.  The cuts on his arms are made with a gelatin, glycerine and corn syrup mixture to make prosthetic skin.  I then painted those with black and my fake blood.

So aside from my nurse dress, both of these costumes were made for under $10. Super easy and surprisingly did not take that long! We LOVE horror movies and LOVE Halloween, so this was something fun for me to do this year. I hope you enjoy them as much as we did!  We’ve been to one Halloween party with it so far, and EVERYONE wanted to get pictures taken with us! We won the costume contest and had a blast. 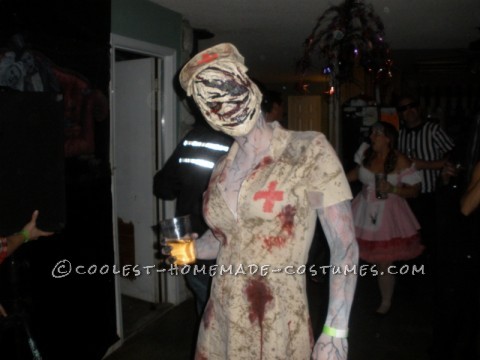 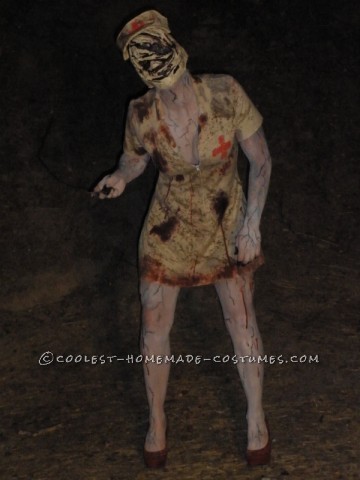 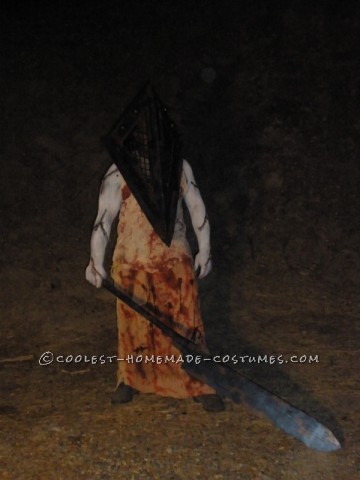 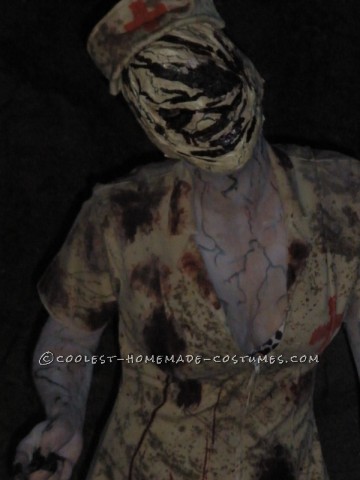 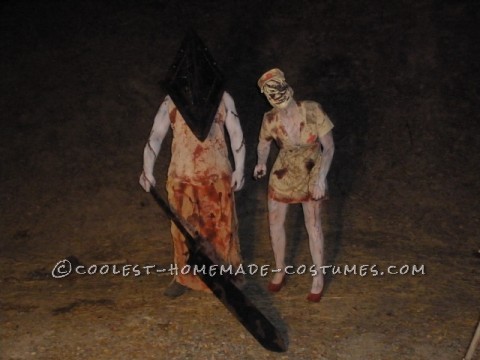 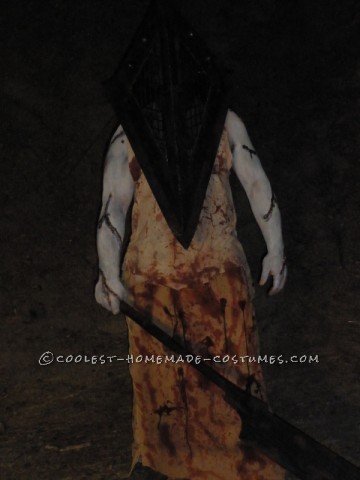 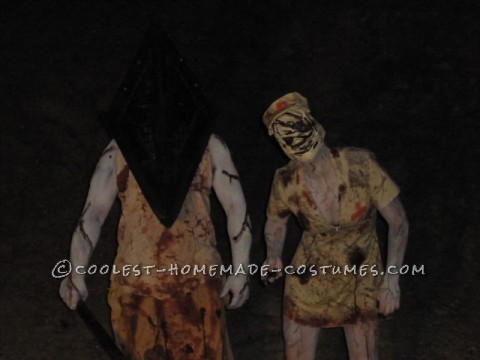