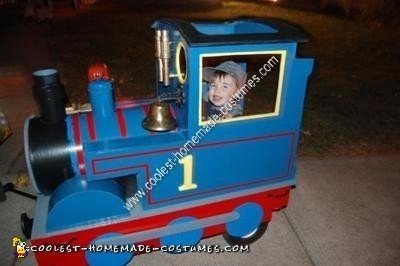 My almost 3 year old son Bodhi is an avid train and Thomas fan. When he told me that he wanted to be Thomas for Halloween this year we looked online to see what we could purchase. There was nothing at all that we saw that looked cool so I decided to build him one that he could ride in. I own my own remodeling business so the task of a Homemade Thomas the Tank Engine Halloween Costume was well within my realm of ability.

I started by building a base that slipped over his wagon frame and could be bolted on for safety. Using mostly ½” plywood I built the sides, cab front and back piece. I did not use any plans, I just guessed at the dimensions and scale of each piece based on the base size and one of his toys and book for reference. I really wanted the roof to have a curve in it like the real Thomas that would also have an open top that would allow him to stick his head out. This was achieved by first cutting the shape out of plywood, then removing the middle section. I then scored the underside half the thickness of the plywood with a circular saw multiple times to give it flexibility. I had already cut the back and front piece of the cab with an arch so all I needed to do was apply wood glue and push down and staple every half inch with a compressor staple gun.

The tank and the wheel wells were made out of Sonitube concrete forms, the funnel and steam doom where the inside cardboard tube from a roll of vinyl flooring. The funnel was topped with a PVC 3” to 4” reducer coupling and a flexible drainage tube cap topped the steam dome.

The light is just ¼” ply glued together in a lantern shape with a removable top. I put a mini headlamp sitting on a wad of Play-Doh to hold it in place inside. The whistles are CPVC repair couplings painted gold, the bell is one my dad found laying around somewhere. The numbers are wooden house numbers.

I wanted the inside of the cab to be fun to so I found various items at either the hardware store or laying around my shop and painted them and arranged them to look like the controls for the train. The inside consists of ½” cpvc pipes and valves, a old gauge, two electrical switches, a hose valve, a lever that I made out of plywood scraps and a string that connects to the bell. To finish it off I cut out a piece of ply to look like the coal door and painted it.

This project took me about 25hr total including all the painting. I spent about $130.00 on the material. I enjoyed the project immensely, and he was the hit of trick or treating. Unfortunately one of the first words out of his mouth when he saw it was “can you make me a Henry now?” I just laughed and said “maybe next year son.” 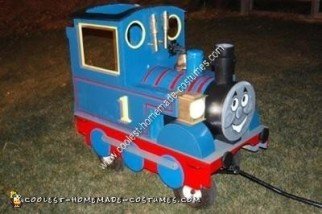 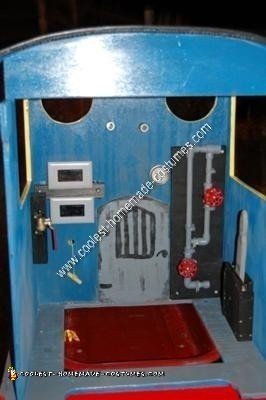 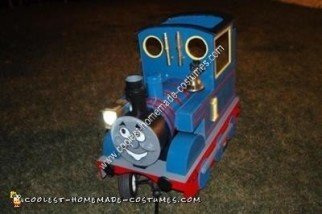