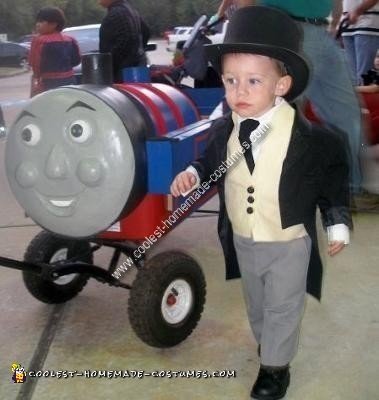 My little guy like most little boys, loves Thomas the Tank, but at 18 months old, I didn’t want a bulky train type costume, so we opted for Sir Topham Hatt, and I turned his red wagon into Thomas.

His part of the costume was simple. I found a little tux with tails and some gray pants at a thrift store. I purchased a little top hat and made a yellow vest from felt. Easy Peasy!
Our wagon has the wooden sides so I used them as supports for a new 13 gallon trash can, which I cut in half leaving about a 6 inches wide strip of the round part at the top (see picture). I fitted this into the frame with the round part hanging over the front of the wagon. I then cut a cardboard circle the size of the opening of the trashcan and covered it with spray foam, which I carved into the shape of Thomas’ face, and then covered in paper mache.

I cut a rubber ball in half for the eyes. I took a piece of linoleum turned backwards and spray painted it black to cover the transition from trashcan to face. I made the sides from 1/8″ Masonite and screwed them into the supports. The smoke stacks are made from salvaged cardboard tubes from the hardware store. The kind carpet comes on. I even added a steering wheel from one of his climbing toys. A little paint and Thomas was born!

This Thomas the Tank Engine and Sir Topham Hatt Costume was great, we didn’t have to carry him around and he was the hit of the fall festival. He rode around in that thing forever. 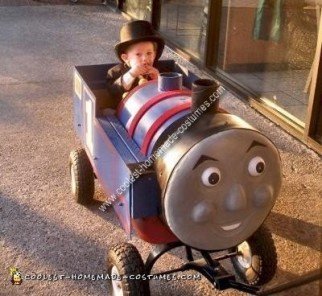 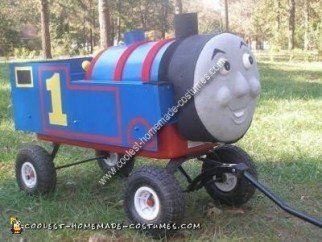 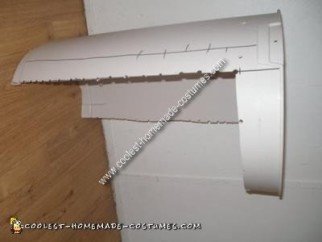