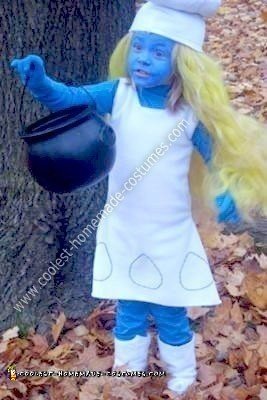 My daughter received the Smurfs on DVD a few months ago. She instantly fell in love and began telling me, even before it was September, that she wanted to be Smurfette for Halloween. The problem is that, because the Smurfs are so vintage, you can’t find Smurf costumes anywhere.

I spent hours online and in costume stores looking for one. I also spent hours looking for things at stores that could easily be turned into a Smurf costume, but with no luck. Finally I bit the bullet and decided that, if she was going to be Smurfette for Halloween, I was going to have to get out my sewing kit and do the single biggest sewing project I’d ever done. Up until this point it had only been minor tailoring and mending tears.

I think this Homemade Smurfette Costume turned out well, though. We got many compliments during the 5 times she went trick or treating this year and people were even stopping us to take pictures of her.