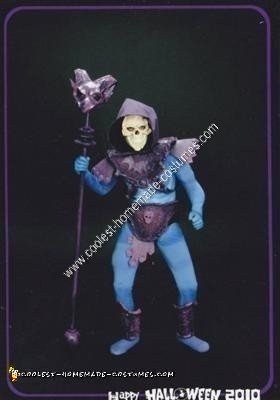 This year my son and I had aspired to create the ultimate costume. After careful collaboration we concluded that one of the greatest villans to ever wreak havoc, with a sinister look was none other than SKELETOR, from Mattels’ Masters of the universe.

We decided to make the end result of our Homemade Skeletor Halloween Costume as close to the actual action figure as possible. Every detail had to be meticulous, from the bat on the chest plate to the skull being outlined in green. First and foremost A LOT of work went into this costume, two months to be exact. Most of material was purchased from Home Depot and Joann’s Fabrics. The skull is my own personal design, there is no replica. I measured my son’s face eye sockets and created a clay sculpture then carefully paper mached it. Chest plate / belt and shin guards are made from sanded insulation foam form over a wire frame sewed together with crafting wire,spray painted and then carefully highlighted by me.

The havoc staff was also a creation of ours, the staff is PVC plastic pipe, the head is glued Styrofoam ball and cone then clay sculpted an carefully paper mached. Then it was spray painted to match Skeletor. The hood was sewed fabric with black interior to create depth. The blue leotard was purchased but the chest was airbrushed to create a subtle appearance of musculature.

We hope you enjoy the end results. Skeletor was a lot of fun and I believe we did him justice! 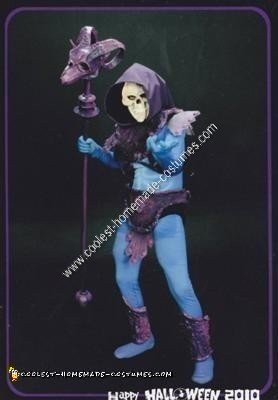 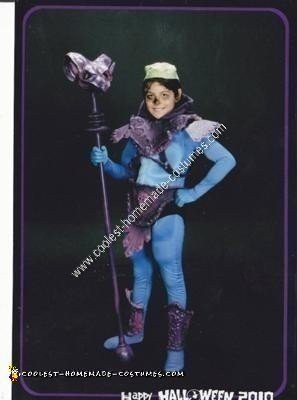