I’ve been a fan of the Avengers for over a year now, and I’ve always had a soft spot for Loki. In the Avengers, Loki does have a good heart and good intentions, but he portrays them in a villainous way, and because of that he is very misunderstood. I can definitely relate to that, so I decided to be a female Loki for Halloween. However, in the original Thor comic book series, Loki is transformed into a woman, and I didn’t find out about this until after I started making my costume. So I’m not trying to accurately cosplay the female Loki, but little bits of my costume were inspired by her.

I started out with making the “helmet.” I put quotations around helmet because it’s more of a headband than a helmet, which is how the original female Loki had her horns. I constructed the helmet from cardboard (excluding the horns) and papier mached that along with the smaller details. I made the horns from a large and rectangular piece of foam, used for throw pillows. I did run into some trouble with the horns because the foam was very squishy and flimsy, so when I cut out the horn shape it wouldn’t stay up. I solved this problem by pouring some of the papier mache liquid on the foam and letting it absorb it in. Then, once stiff, I put the newspaper part of papier mache on the horns. I also ran into trouble with getting the horns to stay on the base of the helmet because the craft glue I had just wasn’t working, but I finally got them to stay with super glue and a little bit of clear duct tape. I finally brought the helmet outside and spray painted it gold. Then I glued an elastic band on it and my helmet was complete. In the comics, female Loki’s helmet appears to be stuck to her forehead somehow, so I clipped up the top layers in my air, slid the headband on, then brushed my layers on top of the band, which worked out much better than I planned.

I made my staff out of empty paper towel and toilet rolls, the blade and details from a cardboard box, and the little blue ball was just a little plastic ball I happened to have. I think it took more time just collecting the paper towel rolls than actually making the staff, because my family only goes through so many paper towels, so I think just collecting the rolls took a good three weeks (I’m so glad I planned ahead for this costume). I just taped all the rolls together at the ends. I drew the blade and other details as closely as I could to the actually Loki staff, but that didn’t go quite as I planned. Then I papier mached the staff and details. I hand painted the blade and details in silver, then spray painted the rest of the staff in the same gold as the helmet. I tried to put the silver details on the staff so it’d look like the original Loki’s staff, but I realized my proportions were pretty off. So I decided to place all the details and the blade on the staff in a way that everything would comfortably stay on and look awesome. I had an issue with getting some of the details to stay on the staff, since the staff is rounded, so I duct taped those parts on (duct tape really does fix everything). Then I just painted the little plastic ball blue and super glued it on the staff, which surprisingly stayed on really well.

I’m not going to make a big deal about making the tesseract because it was really easy. I just cut out six squares from cardboard and glued all the ends together, then papier mached it, and finally painted it blue. It was really that simple.

I didn’t make any of the clothes I was wearing, minus the cape which is just some pretty fabric I found at Walmart and safety pinned on my back. My shirt, however, was dyed green. I realized I didn’t have a green shirt, and it’s surprisingly hard nowadays to find just a plain green tank top anywhere, so I decided to dye a white one that I didn’t wear very often. I didn’t have any dye, and I didn’t want to ask my mom to buy some since she already spent so much on the fabric, paint, and the foam for the horns, so I just gathered up all the green paint and food dye I could find. I boiled some water, enough for the shirt to be submerged in, and put some dark green acrylic paint, greed food dye, and black food dye in the water. Then I added some salt in because I read online that salt can help colors set in clothing, and I let the shirt soak in the dye for three days, moving it around every now and then. I’m surprised that this dye actually worked as well as it did, but I did sweat in the costume a little bit and the shirt was slightly discolored by the end of the night. I just put a black tank top underneath the green one, then tucked it in a leather skirt I had no reason to wear but for this costume. I found some cute net stockings and boots with gold buckles, so everything matched really well.

In total, the entire making of my female Loki costume took about 21 and a half hours, spread over thirteen days, spread over about a month. For Halloween I went trick or treat with my mom, my two little brothers (one whose costume I also helped make), and my boyfriend. I got many compliments, from people who understood it and people who didn’t, about how cute I looked and how awesome my staff was. Only a few people I saw that night said anything about how I was Loki, which I expected since not everyone knows who Loki is, but it still felt really good to make so many people smile with all the hard work I put into this costume. I’m not sure if I’ll work this hard on next year’s costume, but this has definitely been the most fun, stressful, and fulfilling Halloweens I’ve ever had. 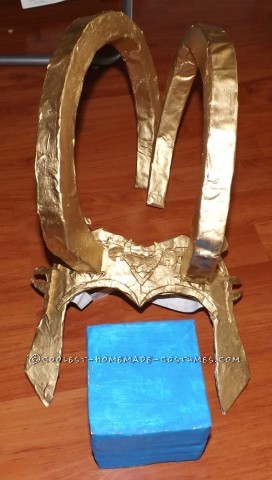