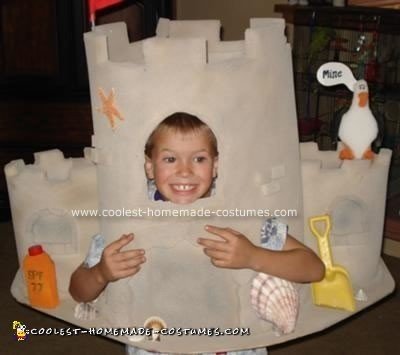 It always seems to snow here on Halloween. Here in Colorado, we have to think of keeping warm while looking Halloween cool. This year my 7 year old wanted to make sure he would be nice and warm while trick or treating and hopefully help others think about warmer days.

What a better way than with a Homemade Sand Castle Costume that says “hangin’ on the beach.”

We took 1 inch foam sheets and cut them to form a tube around him and then created 2 smaller tubes to put on either side that would give the castle more depth. We hot glued it to a sturdy cardboard frame that would fit all three tubes. We put him in the center and the other tubes on either side. We put a hole in the center for our son to be standing in the largest tower. We put notches on the top to look like the towers of a castle. We took two shades of golden brown – “sand colored” spray paint and coated the castle. It had a natural shimmer fleck from the foam itself – which was really cool. We also took the extra foam pieces and made the outline of windows and fake bricks.

He wore ribbon suspenders that were hot glued to the base on the front and back side and fit over his shoulders so his hands were free to carry a bucket for candy gathering.

We topped it off by using real sand glued to the base all around the castle. Also with a few shells and beach toys glued in focal points, it all came together. While making it, my son he kept saying “mine mine,” like the seagulls on “Finding Nemo,” so we decided to carve one out of foam and perch it on a tower. His favorite colors are on the flag pole that was created with a dowel rod, wire and material scraps.