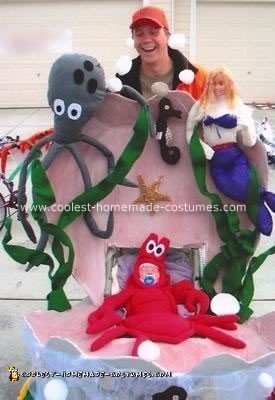 I decorated by myself this Homemade Lobster in a Clam Shell Baby Costume. Took a stroller to create the clam shell. I took one big cardboard box and paper mached it into the shape of a clam shell. Painted the shell outside white, inside pinkish. Had to put cushion where my son laid as he is only 3 weeks old.

Made a mermaid from a pillow for the whole body then covered the tail with sparkly gem material to include the swim top. Used a doll head for mermaid and glued it in there. Black seahorse also made from a pillow with sewn black material and white material for belly and eyes. Just glued a starfish and glued on sand dollars everywhere to include hanging sand dollars up in the air. Green seaweed is felt that is strung out and pinned to everything.

Octopus is made from a pillow again with gray blanket material with black and white material glued as eyes and spots on head. The lobster is made from a blanket too, I drew out a pattern on newspaper took the material cut and sewn together. Made legs/claws and stuffed with pillow stuffing glued white and black material for eyes, white material for teeth. Stuffed my son with warm blankets so he would be warm.

I would say I’m one of the few creative men I’ve known, and yes that’s me in the pic.

Coolest Lobster in a Pot Costume