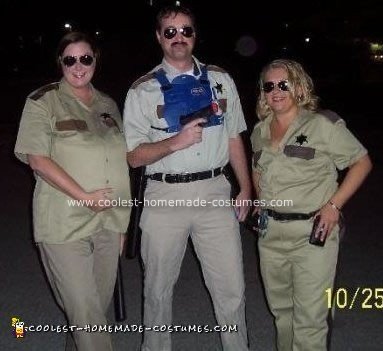 The three of us did some characters from Reno 911. This is our Homemade Reno 911 Group Costume. I was pregnant Trudy Weigel, my brother was Deputy Travis Junior, and my friend was Clementine Johnson. We either had or bought the khaki tops and pants (the girls bought Dickies brand shirts and pants – cheap – at Wal-Mart), and bought very cheap brown pieces of fabric for the “accents.”

For Trudy, I just roughly cut the pieces to size and used fabric glue to glue them to the shirt pockets and the tops of the shoulders. I wish I had a cat pin for Trudy’s lapel, just like the character! I have long hair so just had to pull it back to re-create Trudy’s super short hair. We also bought brown ribbon and fabric-glued those down the sides of the pants. And as you can probably see the square outline, that pregnant stomach was just a sofa pillow tied around my waist.

As Deputy Travis Junior, my brother created the mustache using my black eyeliner, which was much easier than one of those “sticky” fake mustaches. Junior usually wears a bulletproof vest on the outside of his clothes but the closest we could find was a child-sized chest protector from the dollar store – which was hilarious in person.

All in all this Homemade Reno 911 Group Costume was pretty easy!