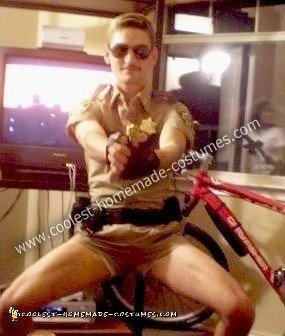 I love the show Reno 911 and had the idea of going as Lieutenant Jim Dangle this year. As I looked around for various costumes on the internet, I didn’t find any that were up to par in my book. I am a college student who has never taken any kind of home-ec class in the past but for this year, I had to learn how to sew.

I bought pants and made them short and a long sleeve shirt and made it a shortsleeve. All of the dark brown accents were added by me as well as all of the patches. I made a real looking duty belt from some items around the house and even used permanent hair-dye to pull the costume together.

This was by far my best costume up-to-date simply because of the fact that it was so well received. I was in Walmart doing a test run of the costume before I went to the Halloween parties a few days later. While in Walmart, at one point I was being applauded by the people around me in the checkout line. I had so much fun with this Homemade Lieutenant Dangle Halloween Costume and never once broke character the entire night.

As soon as I walked out of the door that evening to go to the party I left Jeff behind and was now Lieutenant Jim Dangle of the Reno Sherriff’s Department, Reno NV. 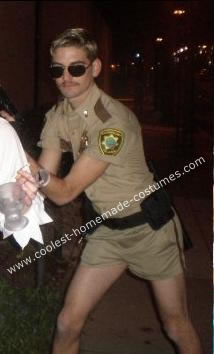